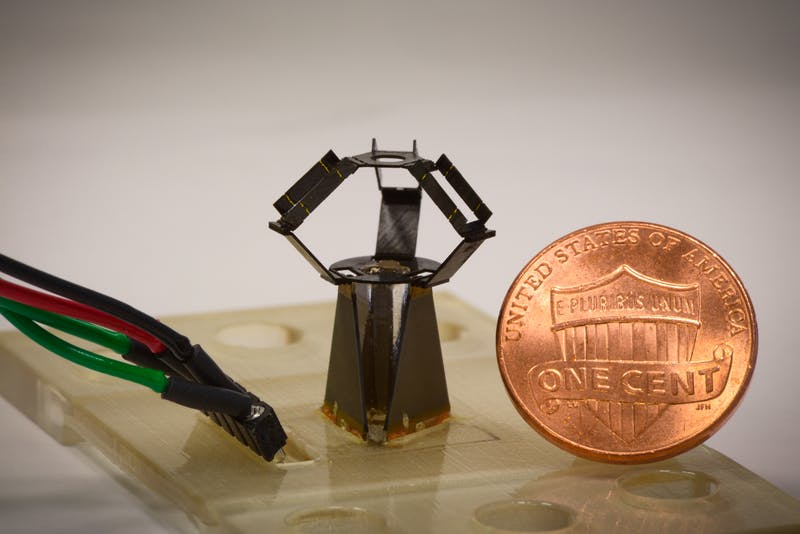 It takes the traditional three articulating arms of a “pick and place” Delta Robot and miniturises them to a millimeter-scale version, hence the “milliDelta” name.

As reported in Science Robotics, the new design has actually been developed by Robert Wood’s team at Harvard’s Wyss Institute for Biologically Inspired Engineering and John A. Paulson School of Engineering and Applied Sciences (SEAS). To give it proper credit.

“By integrating their microfabrication technique with high-performance composite materials that can incorporate flexural joints and bending actuators, the milliDelta can operate with high speed, force, and micrometer precision, which make it compatible with a range of micromanipulation tasks in manufacturing and medicine.”

According to Robert Wood, who is a Core Faculty member at the Wyss Institute and co-leader of its Bioinspired Robotics platform:

“The physics of scaling told us that bringing down the size of Delta robots would increase their speed and acceleration, and pop-up MEMS manufacturing with its ability to use any material or combination of materials seemed an ideal way to attack this problem.”

“This approach also allowed us to rapidly go through a number of iterations that led us to the final milliDelta.”

The Wyss team has apparently already demonstrated that the milliDelta can work in a space of just seven cubic millimeters.

It could apply forces and exhibit trajectories – together high frequency operation – that could make it ideal for “micromanipulations in industrial pick-and-place processes and microscopic surgeries such as retinal microsurgeries performed on the human eye”.

The Wyss Institute, which posted the video below, adds:

“Possible applications at this scale include microassembly, micromanipulation, and tremor cancellation in microsurgery. Our design is powered by three independently controlled piezoelectric bending actuators.

At 15mm x 15mm x 20mm, it has a payload capacity of ~3x its mass. It can operate with precision down to ~5µm, at frequencies up to 75Hz, and experience accelerations of ~22g. The design has potential for high-bandwidth, high-precision applications at the millimeter-scale.”

Thanks to Sue P. for highlighting this one.