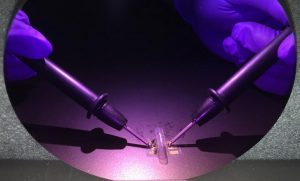 “The finding might overcome a basic issue confronting medical engineers: how to create electronics that are flexible enough to be worn comfortably on or even inside the human body without exposing a person to harmful chemicals in the process, and will last long enough to be useful and convenient,” said NIST.

Medical monitors could keep track of changes in human bodies, from fluctuations in the amount of potassium in sweat, to the levels of sugars or proteins in the bloodstream.

“These changes manifest themselves a bit differently in each person, and some of them could mark the onset of disease in ways not yet apparent to a doctor’s eye,” siad NIST, “Wearable electronics might help spot those problems early.”

Gold conductors are bio-compatible – they do not corrodeand are non-toxic – but according to NIST is too brittle.

“Gold has been used to make wires that run across plastic surfaces, but until now the plastic has needed to be fairly rigid,” said NIST biomedical engineer Darwin Reyes-Hernandez. “You wouldn’t want it attached to you; it would be uncomfortable.”

Serendipitously Reyes-Hernandez was using a commercial porous polyester membrane patterned with gold for something else, and discovered that it continued to conduct electricity even when the plastic was twisted a few times. This wasn’t the case with non-porous membranes.

“Apparently the pores keep the gold from cracking as dramatically as usual,” he said. “The cracks are so tiny that the gold still conducts well after bending.”

And the porous membrane’s electrodes conduct better than counterparts on rigid surfaces, “an unexpected benefit that he cannot explain as yet”, said NIST.

Long-term testing is now under way, as is work on a sensor.