It’s got to the point where only buying Pixel or Nexus devices is anyway of guaranteeing you will get the next version of Android released within 12 to 18 months.

All of which is a long-winded introduction to Project Treble – Google’s attempt to ameliorate the situation.

One thing we’ve consistently heard from our device-maker partners is that updating existing devices to a new version of Android is incredibly time consuming and costly.

With Android O, we’ve been working very closely with device makers and silicon manufacturers to take steps toward solving this problem, and we’re excited to give you a sneak peek at Project Treble, the biggest change to the low-level system architecture of Android to date. 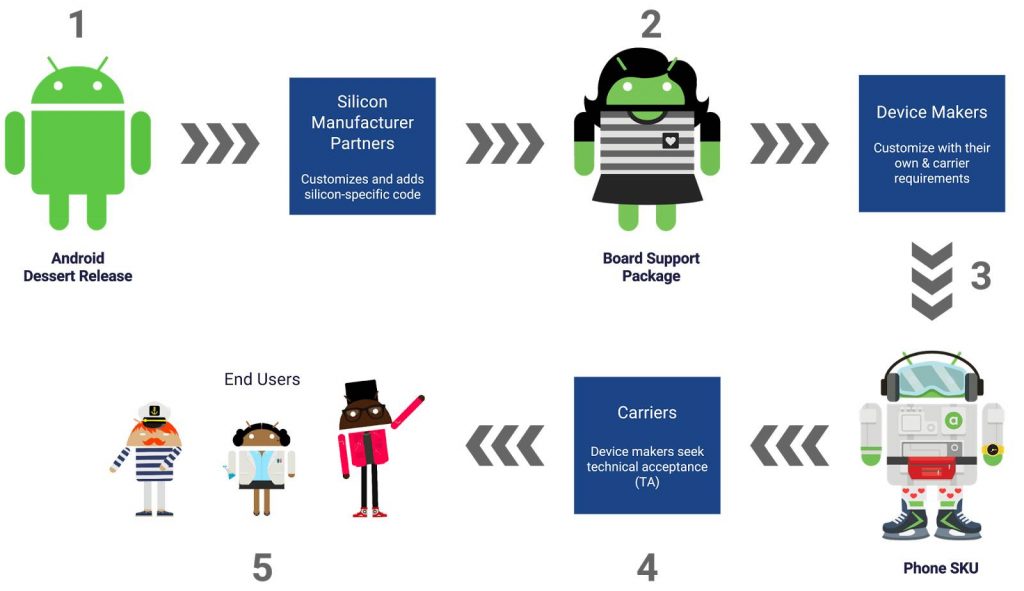 After covering the “life of an Android release” (see above), he says the goal is to re-architect Android to make it easier – and thus faster and less costly – for manufacturers to update devices to a new version of Android.

Drawing a parallel with the compatibility of the Developer API,  specified by the Compatibility Definition Document) across a host of differently specced devices from different manufacturers, he says the aim is to achieve similar operability across the “Android OS framework”.

The core concept is to separate the vendor implementation — the device-specific, lower-level software written in large part by the silicon manufacturers — from the Android OS Framework.

The idea to establish a stable vendor interface to provide access to the hardware-specific parts of Android, separating issues involving the underlying silicon manufacturers from those of the handset makers looking to deliver a new Android release to consumers.

Easier said than done, of course. And Project Treble will be no silver bullet to the fragmentation issue, but it could be the start of an interesting process.

Where it touches reality is that Project Treble will be coming to all new devices launched with Android “O” and beyond, says Google (Project Treble architecture is already running on the Developer Preview of O for Pixel phones, apparently).

In addition to the architectural changes, we’re working with our silicon and device partners to take their code changes, such as features for a carrier network in a specific country, and move them into the common Android Open Source Project (AOSP) codebase. For example, Sony and Qualcomm contributed dozens of features and hundreds of bugfixes to Android O so they no longer need to rework these patches with each new release of Android.

The plan is to publish full documentation for Project Treble on source.android.com with the launch of O later this summer, says Malchev.