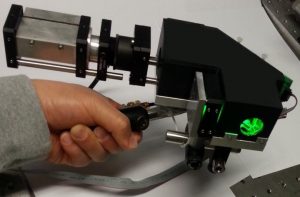 It includes ultra-fast LEDs and moveable mirrors to send a secret key at more than 30kbyte/s over 500mm.

“The idea is that this gadget would be a mobile object that talks to something that is fixed,” said Oxford researcher Iris Choi. Integrated into a phone, for example, it could allow secure links to near-field communications mobile payment systems and indoor Wi-Fi networks, as well as improve the security of ATMs.

Quantum keys are considered secure because if someone intercepts their quantum bits, and then passes them on, they are corrupted in measurable ways. “We’re not saying this technology can prevent being eavesdropped on, but if you do eavesdrop, we know you’re there,” said Choi.

Six resonant-cavity LEDs with overlapping spectra are used, each filtered into pairs of different polarisation to represent 1s and 0s -horizontal or vertical, diagonal or anti-diagonal, or circular left or circular right.

The circularly polarised LEDs transmit the key, while the other pairs are used to measure channel security and provide error correction.

Every four nanoseconds, one of the channels produces a 1ns pulse in a random pattern.

At the other end, six polarised receivers pick up the light from their matching LEDs.

It’s important not to let a potential adversary know which channel has which polarisation, said the University, because that would reveal which bits were being sent, but there will always be some slight variation in the wavelength emitted by each LED, which could serve to identify them and give a hacker a way to break the code.

The researchers solved this problem by equipping both the transmitter and the receiver with filters that select only a portion of the light, so they all shine with the exact same colour, regardless of which polarisation they produce.

Achieving sufficient data rate for the scheme to work requires that most of the photons get to where they’re supposed to go, which is why there are MEMS beam-steering mirrors to counter jitter introduced by hand-held operation.

For aiming, both receiver and the transmitter include beacon LEDs of a colour other than the active channel. contain a bright LED with a different color than the quantum key distribution LED that acts as a beacon.

Nokia participated in the research, which is published at ‘Handheld free space quantum key distribution with dynamic motion compensation‘ in Optical Express.