Thanks to the Raspberry Pi Organisation for this one, highlighting the use of a Pi to help with looming (you know, weaving, interlacing threads to form a textile).

Obviously, manual weaving can be slow, tough work and one sympathetic spirit has harnessed the power of a Pi to keep the weaving option open for older enthusiasts. Step forward one Fred Hoefler, who has taken a desktop loom and automated it.

His device is intended to help older weavers who have trouble with the hard work of throwing the shuttle and holding down the pedals. Assistive looms cost upwards of $10,000: Fred’s solution comes in at a tidy $150, factoring in loom, Pi, and some motors from Amazon. So this isn’t for hobbyists like me: this loom can be a way for people whose livelihoods depend on being able to weave to continue working long after they might have had to retire.

Fred takes up the story on his own website…

These were the requirements for the project:

Basically, a Python script controls the loom, activating the GPIO pin connected to the motor control unit, with on or off circuit activated for one second. As it stands his script hard codes the sequences but he envisages you could adapt the Python code to read a plain ASCII .wif file, such as are used in most loom control programs, he says.

What about the motor at the heart of the project, which sits behind a “motor control unit”? 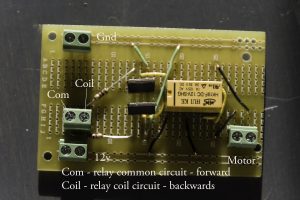 The motor control board is pictured, above.

The result certainly looks impressive, and the work stretched across a year, he says – check out the videos further below.

What did Fred learn from the project? If he were to do it over again, he said, he would investigate other types of actuators, for example electric door lock actuators for cars. While they can cost as little as $5 and can be attached to a walking beam mechanism to activate the harnesses, do they have enough power, or travel far enough, he wonders?

Read all the details on Fred’s project page, which includes a link to his source code.