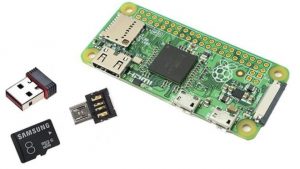 Previous winners have been the Severn Bridge, the Kinect sensor and the CT scanner.

As well as teaching thousands of children to code – Pi’s primary purpose – it has had considerable success in industrial applications.

It also knocked Intel out of this market. Last week Intel said it would discontinue three competing devices.

The other finalists were Darktrace, for a cyber ‘immune system’ that uses machine learning to self-learn what is ‘normal’ for an organisation’s computer network, and Vision RT, for its very accurate real-time 3D body surface imaging system that enables doctors giving radiotherapy to target cancerous tumours.

The Raspberry Pi Foundation, through its easy to use, credit card-sized microcomputers, is redefining how people learn about and engage with computers. From initially setting out to help increase the number of computer science applicants to the University of Cambridge, the Raspberry Pi team has put the power of computing into the hands of people all over the world.

By doing so, they are helping to ensure future generations are capable of understanding and shaping our increasingly digital world, able to solve the problems that matter to them, and equipped for the jobs of the future.

The nominated team members are:

NB: Featured in the video above is one of the EW BrightSparks of 2017, Matt Timmons-Brown, aka The Raspberry Pi Guy.