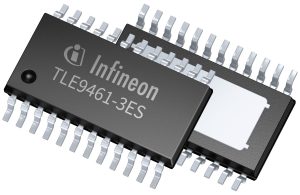 The Mid-range are available now, the Lite come on the mArket next month.

They are the first SBCs on the market supporting the ISO CAN FD protocol for communication at 5 Mbit/s for a large variety of automotive applications.

An SBC is the central supply of power and communication for microcontrollers within electronic control units (ECU) in cars.

SBCs are ICs that combine voltage supplies, communication bus interfaces (CAN, LIN) and supervision features. The combination of these three elements in one chip leads to lower system costs and up to 80 percent smaller design footprint compared to discrete solutions.

The new Infineon Lite SBCs are the entry level SBCs at optimized system costs. They incorporate one CAN transceiver to address a broad range of applications such as in-cabin wireless charger, NO x sensor, gear shifter or light control units.

The Mid-Range+ SBCs are more powerful devices with one CAN and up to two LIN transceivers to support e.g. body control modules and gateway modules.

Originally, the CAN FD protocol was established for software updates during production and service events.

Today, also the communication within the car and its connectivity to the outside world require an increased bandwidth and longer payload.

For example, high-end front light applications such as matrix LED lighting require a large amount of data provided by camera systems and sensors to ensure a glare-free high beam.

In addition to high-speed communication, the new Infineon SBCs allow a lower power consumption. With their optional partial networking feature they reduce current consumption by putting the ECU in a sleep or stop mode when it is not needed.

The Lite SBC family also features a charge pump to drive high side n-channel power MOSFETs. It can disconnect an external load during sleep mode in order to further reduce quiescent current.

Moreover, with the Mid-Range+ family external loads can be driven by four high-side switches.

The SBCs  are scalable regarding the number of communication interfaces and are software compatible with other Infineon SBC families such as the DCDC and Multi-CAN Power SBC families (TLE94x1, TLE926x & TLE927x).