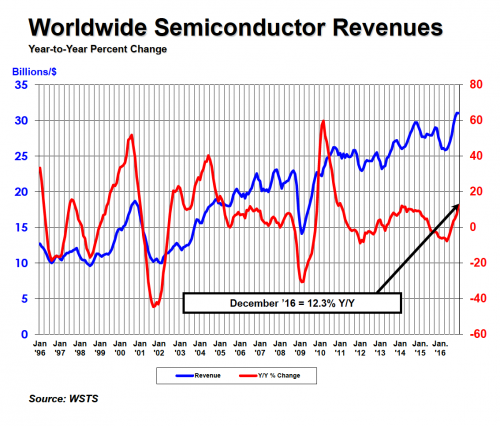 “Following a slow start to the year, the global semiconductor market picked up steam mid-year and never looked back, reaching nearly $340 billion in sales in 2016, the industry’s highest-ever annual total,” says SIA CEO John Neuffer, “market growth was driven by macroeconomic factors, industry trends, and the ever-increasing amount of semiconductor technology in devices the world depends on for working, communicating, manufacturing, treating illness, and countless other applications. We expect modest growth to continue in 2017 and beyond.”

Several semiconductor product segments stood out in 2016. Logic was the largest semiconductor category by sales with $91.5 billion in 2016, or 27% of the total semiconductor market. Memory ($76.8 billion) and micro-ICs ($60.6 billion) – a category that includes microprocessors – rounded out the top three segments in terms of total sales.

“A strong semiconductor industry is strategically important to U.S. economic growth, national security, and technological leadership,” says Neuffer. “We urge Congress and the new administration to enact polices in 2017 that spur U.S. job creation, and innovation and allow American businesses to compete on a more level playing field with our competitors abroad. We look forward to working with policymakers in the year ahead to further strengthen the semiconductor industry, the broader tech sector, and our economy.”