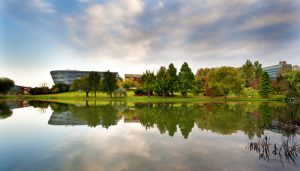 An alternative to batteries which could give electric cars the same range as petrol cars and the same re-charge time as filling a tank of petrol, has been developed by Augmented Optics and Surrey University.

The researchers developed new polymers based on large organic molecules composed of many repeated sub-units and bonded together to form a 3D network.

The development could translate into very high energy density supercapacitors making it possible to recharge mobile phones, laptops or other mobile devices in just a few seconds.

The technology was adapted from the principles used to make soft contact lenses, which Dr Donald Highgate (of Augmented Optics, and an alumnus of Surrey University) developed 40 years ago.

Although supercapacitors can charge and discharge rapidly over very large numbers of cycles, their poor energy density per kilogramme (approximately just one twentieth of existing battery technology), means that they can’t compete with batteries in most applications.

“While this research has potentially opened the route to very high density supercapacitors, these polymers have many other possible uses in which tough, flexible conducting materials are desirable, including bioelectronics, sensors, wearable electronics, and advanced optics,” says
Dr Ian Hamerton, Reader in Polymers and Composite Materials from the Department of Aerospace Engineering at Bristol University