A microcontroller like the kind that powers Arduino dev boards can be manipulated in several different ways. One of the most convenient control methods is to send and receive commands using a serial interface.

This works well if your board connects to your computer via a USB cable and a USB-to-serial chip, but some applications might require a wireless option. Fortunately, Bluetooth modules like the HC-05 and HC-06 can send serial signals wirelessly from your Android device straight to your microcontroller.

Once paired, these modules relay serial information from your smart device to the dev board and vice versa. Just reverse the receive (Rx) and transmit (Tx) lines between your Arduino and Bluetooth module, and provide the proper input voltage level. This method requires zero software pairing; your device and the module handle that on their own.

How, then, do you get your phone to send specific serial signals to your Bluetooth module, receiving feedback as needed?

We combed through the Google Play store to figure out which are worth installing and which you should skip over. Our testing is based on a piece of Arduino code that turns an Arduino Uno’s onboard light on and off. Controlling actual devices may be a little more complicated, but this code offers a baseline for comparison.

It’s hard to get more basic or foolproof than Bluetooth Terminal, so here’s how it works.

Since you know exactly what you’re sending and receiving, this app is great for testing and setup purposes.

On the other hand, if you need to repeatedly enter certain commands (driving an RC vehicle, etc.), you’ll eventually want a better-suited option. Bluetooth Terminal handles text entry quite well, but speed isn’t its strong suit.

Once you’ve graduated from the debugging stage to driving a remote-controlled car, tank, or robot, choose a controller with onscreen buttons. One such program is Arduino Bluetooth Controller by Ioannis Tzanellis.

It features a controller mode that lets you assign characters to 10 buttons, all arranged as a video game-style control pad. It works well, but 10 buttons can get restrictive. Aesthetically, the ads constantly playing in a portion of the screen are distracting.

Fader mode has a slight delay, and terminal doesn’t return feedback text from your device, but it’s otherwise functional. Overall, Arduino Bluetooth Controller is a usable app, but it’s not the best option on this list.

Giumig’s Arduino Bluetooth Controller features some of the same functionality as Tzanellis’s, including a controller mode with 10 assignable buttons in an uncluttered control pad arrangement. One interesting feature is that when you press an active button, you get haptic feedback in the form of a short vibration, letting you know that you have activated a button. Also, there are no ads.

After testing, this seems to be the best app of its type on this list, and it will likely be my go-to for simple vehicle control.

Most controller apps use some variation of the following:

Currey’s software, however, does things much differently. The interface design does not reside on your Android software; instead, it sets your screen up based on the device to which it’s connected.

This method comes with a bit of a learning curve, but it also means that you can log onto any properly set up Bluetooth-enabled microcontroller and the correct interface will appear on your smart device. The interface elements have a set arrangement, but only appear if you’ll need them for your application.

This static arrangement restricts usage somewhat—for example, it wouldn’t work well for an RC vehicle— but this software presents an excellent solution for the right application. Visit Currey’s website for more information on how to set it up. 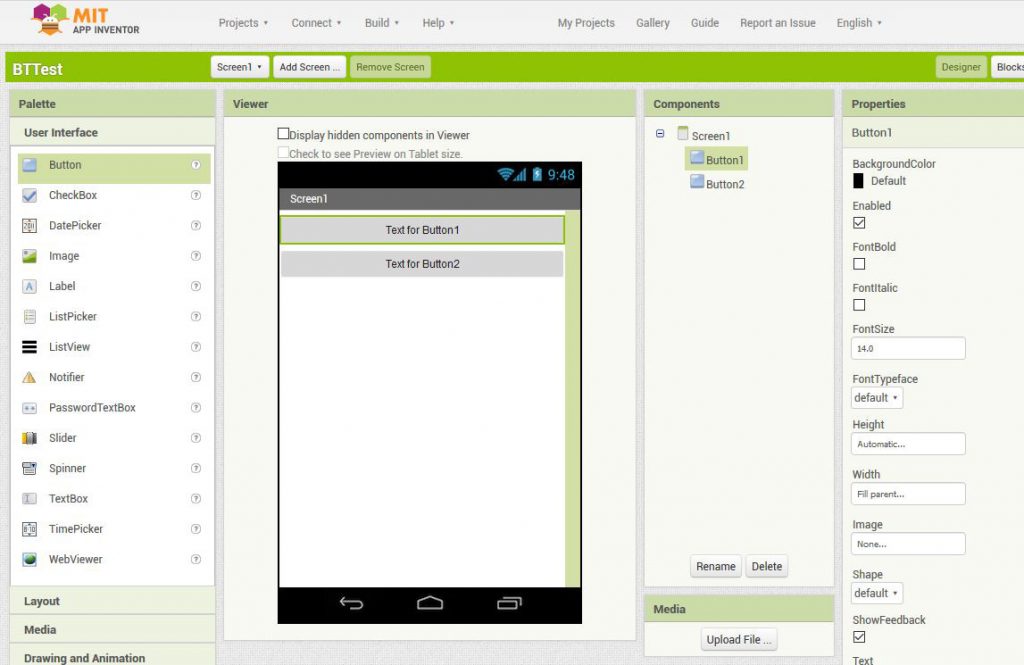 Use it to create your own custom interface. In fact, it’s so versatile that one app we tested for this article, Bluetooth Arduino Tank Control, was made with this software.

Other apps we tested for this article include:

You can choose among many options to control your devices, but Bluetooth certainly presents some significant advantages. With the wide variety of software available, there’s a good chance you can find exactly what you need for your application. If not, it’s time to build it yourself!

Jeremy S. Cook is an engineer who has worked in manufacturing automation and writes for a variety of technical publications. Zach Wendt is a mechanical engineer with a background in consumer product development. He works for Arrow Electronics, a major supplier of Arduino products.