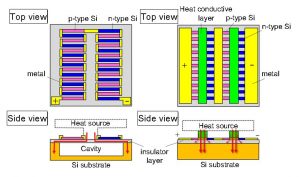 From Waseda, Osaka and Shizuoka Universities, the team has turned to a novel arrangement silicon nano-wires.

“Due to advantages such as its relatively low thermal conductance but high electric conductance, silicon nano-wires have emerged as a promising thermo-electric material,” said Waseda University.

Silicon-based thermoelectric generators conventionally, according to Waseda, employ long (10-100μm) silicon nanowires suspended on a cavity (see left diagram). The cavity prevents heat from by-passing the generator wires, thereby maximising the temperature difference across the wires. “However, the cavity structure weakened the mechanical strength of the devices and increased the fabrication cost,” said the University.

Following thermo-electic simulations, the team discarded the long wires, and replaced them with wires 250nm long and under 100nm wide etched through the top layer of a silicon-on-insulator wafer using ArF immersion lithography – see diagram.

Exactly how the arrangement works is unclear from published information, and Electronics Weekly has requested clarification from researcher Professor Watanabe.

According to Waseda University, Watanabe earlier said: the new generator demonstrated the same power density as the conventional devices and, surprisingly, he is reported to have said, thermal resistance was suppressed, and the power density multiplied by ten times by thinning the generator’s silicon substrate from the conventional 750nm to 50nm with backside grinding.

The device is suitable for mass-production, said the University, and was presented at the 2018 Symposia on VLSI Technology and Circuits held in Hawaii in the paper: ’10μW/cm2-class high power density silicon thermoelectric energy harvester compatible with CMOS-VLSI technology’.