Zytronic is making a global reputation as a developer and supplier of ruggised capacitive sensors from its facility in Newcastle. 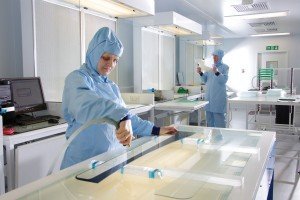 The firm has expanded the ISO 5 (Class 100) cleanroom area at its manufacturing in Newcastle by 25%.

Touch screens are manufactured in cleanroom conditions and Zytronic is increasing throughput of large touch sensors of up to 65-inch diagonal.

Future, which has been working with Zytronic for some time on customer specific projects, will now carry the firm’s custom designed ZyBrid p-cap touch sensors.

The distributor will also design custom interactive display modules and sub-assemblies for industrial and medical applications.

“With this new agreement, those customers who prefer to purchase a fully integrated touch display solution from a supplier with global reach and support have a new option.”

Zytronic manufactures the touch sensors at its facility in Newcastle. It also designed the display driver and data processing elements which make up a complete touch control assembly.