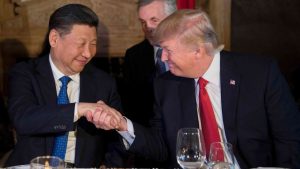 Soon after Trump’s departure, China Vice Premier Wang Yang, who ranks No.4 in the Communist Party, published an article under his own by-line in the Peoples’ Daily newspaper, saying thst foreign companies would no longer be forced to turn over technology to China in return for access to the China market.

The forced technology transfer has been a sore point with the USA for many years and the US government launched a probe into the practice in August.

It was one of the key requirements that President Trump put to Xi Jinping in their talks on trade.

Another benefit from the Trump visit was a concession for the finance industry. Vice Finance Minister Zhu Guangyao said that foreigners could now own banks, brokerages and asset management companies in China.