Latest figures from industry association DMASS indicate that the chip market shows no signs of slowdown in Q2/2017. 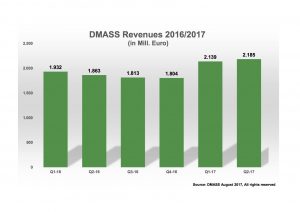 According to DMASS, semiconductor sales as reported by the members ended with another record of €2.19bn, an increase of 17.3% over the corresponding quarter last year.

However, the UK joined France as the worst performing regional markets.  The UK and Ireland grew below average at 9.6% to €154m and France grew by 8.5% to €151m.

For the first six months, DMASS reported over €4.3bn of consolidated semiconductor sales, 14% more than the first half of 2016.

“As many market participants feel right now, the dynamic growth over the last nine months was unprecedented. The significant allocations in several product areas make it difficult to predict the rest of the year, but it would be safe to assume that double-digit growth will continue through 2017.”

Regionally, Poland, Turkey, Russia and Israel lead the growth wave, with increases between 30 and 40%.

“If you look at the growth in Eastern Europe, it is mainly driven by production shifts from Northern and Central Europe. Positively surprising is the resilience of the Italian high-tech market against the domestic economic problems.”

At the product side, the growth is across the board, microcontrollers/processors and memories have seen the highest growth rates, followed by FPGAs.

“Looking forward remains difficult”, said Steinberger: “Lovely to see 2-digit growth as record levels continue, but with the challenges ahead on the distribution channel – whether it is business model, margin pressure or regulatory influences – the outlook becomes teeth-grinding.”