The five year old firm is called Efinix and is also being backed by Hong Kong X Technology Fund (HKX), and Samsung Electronics’ investment arm in a $9.5m funding round. 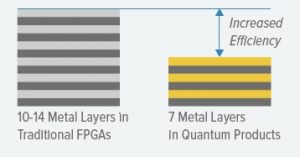 Efinix has developed a programmable chip-level platform, it calls Quantum, which it says can deliver a significant performance-to-die area advantage over traditional programmable technologies.

The basic building block of the technology is a programmable logic cell which can also be implemented as a routing cell.

This allows the XLR cell to function as either a LUT-based logic cell or a routing switch encoded with a scalable, flexible routing structure.

The result is more efficient use of active die area which the firm claims can be as much as 4x compared to traditional FPGAs. And this advantage is scalable by logic density.

“Efinix’s solution can address a wide variety of applications that are typically not served by today’s FPGAs,” said Salil Raje, senior vice president, software and IP products at Xilinx.

Two target applications are Asics and FPGAs for mobile devices and artificial intelligence.

“High-volume applications and markets are prime targets for our Quantum-accelerated products,” said Sammy Cheung, co-founder, CEO, and president of Efinix.