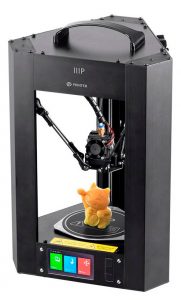 And it transpires that around £200 will get you one.

Two printers seem to come up in reviews over and over as cheap and reasonable:

‘Mini Delta’ by Monoprice  and ‘Da Vinci Mini’ by XYZPrinting

Both can do 0.1mm layers – nice and fine, and the Mini Delta will go thinner too.

BTW, Whist it is easy to understand what controls the vertical thickness of a layer in these printers, while I can guess, I still have no idea what actually controls the width of a printed line.

The ‘delta’ mechanical set-up for me is a wonder – it looks like a proper engineering solution, if a little tricky for the background maths.

A note on the Mini Delta, is that is is low-cost, but not necessarily a beginners machine as it appears to lack dedicated design software, instead requiring generic software to be set up accordingly – and it is apparently noisy. 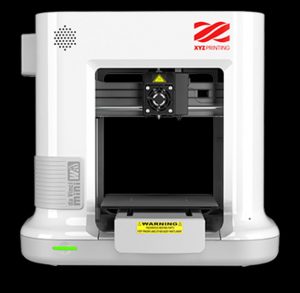 I have tried neither of these, so caveat emptor.

My desire is to feed my monomania and build another bike light, this time not by getting the lathe out but by printing.

The favoured approach is through selective laser sintering (SLS) – always done by specialist companies as the printers are so expensive. 3DprintUK was the obvious choice until their minimum order price went up to £40 – run by a nice guy though, who helped Electronics Weekly write an article on enclosure prototyping.

SLS nylon is REALLY tough and, if the print is small, makes a prototype that can be dropped – even thrown around – with little chance of breaking. The resulting prints are porous, and so need some work to make them waterproof.

The resulting prints are can look great, but always seem a little fragile – particularly between printed layers – breaking along the x-y plane as printed.

It doesn’t help that PLA, the most common FDM printing plastic, is brittle.

This said, I suspect a fairly robust model could be made in it – although possibly not robust enough for, say, a reliable handlebar clamp without plenty of material and much pondering on printing axis.