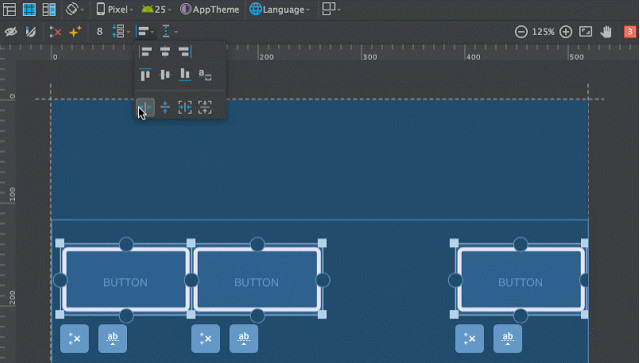 There seems to be no single major new feature, but changes cover areas such as an updated widget palette in the Layout Editor, use of the ConstraintLayout attribute, use of Layout Favourites, and WebP image support.

We are most excited about the quality improvements in Android Studio 2.3 but you will find a small set of new features in this release that integrate into each phase of your development flow.

When designing your app, take advantage of the updated WebP support for your app images plus check out the updated ConstraintLayout library support and widget palette in the Layout Editor. As you are developing, Android Studio has a new App Link Assistant which helps you build and have a consolidated view of your URIs in your app. While building and deploying your app, use the updated run buttons for a more intuitive and reliable Instant Run experience. Lastly, while testing your app with the Android Emulator, you now have proper copy & paste text support.

In terms of development, you can also set a “Lint Baseline” – you can set unresolved lint warnings as a baseline and, from that point on, Lint will report only new issues. Helpful, for example, if you face a blizzard of legacy lint issues with your app, but just want to focus on fixing new problems.

An App Links Assistant allows you to create new intent filters for your URLs, declare your app’s website association through a Digital Asset Links file, and test your Android App Links support.

It was back in October 2016 that Goggle released version 2.2, which featured a new Layout Editor and Layout Inspector, a new Assistant window to help integrate Firebase services into apps, a new APK Analyzer tool and an Espresso Test Recorder tool to create UI tests by recording your own interactions.