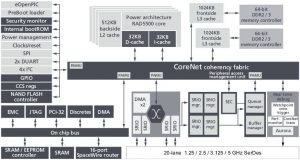 Up to 16Gbyte of DDR3 ram can be fitted and up to 1Gbte of flash. Comms is 16 ports of 320MHz SpaceWire and four RapidIO ports up to 5Gbaud.

Secure boot and an encryption engine are included. 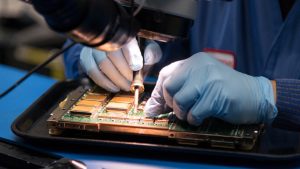 100Krad total ionising dose radiation hardness is claimed, as is latch-up immunity and a power consumption of 35W at 95°C.

“We’ve been delivering radiation-hardened components for almost three decades, and our customers have come to trust the performance, reliability, and longevity of our technology,” said BAE director of on-board processing Dave Rea. “RAD5545 is the next step in the evolution of space computers. It’s the most technologically advanced radiation-hardened, general-purpose processor for space applications.”

RAD5545 supersedes the firm’s RAD750 and is made in Virginia. The single-core RAD5515 processor is an option.

Applications are expected from weather and planetary exploration to communications, surveillance, tracking, and national security missions.

According to BAE, it has provided more than 900 computers on over 300 satellites.