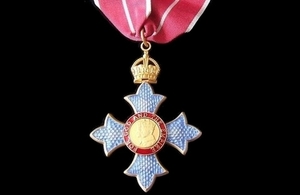 Leading the way is Sir Alec John Jeffreys, Emeritus Professor at Leicester University, who has been made Companion Of Honour (CH). A founding father of genetic profiling, he developed the concept of DNA fingerprinting.

[He] has delivered outstanding insights into human genetic variability and translated these findings into genetic profiling technologies that have had profound impact across the criminal justice system and society as a whole. He developed the concept of DNA fingerprinting and became the founding father of genetic profiling. He also uncovered the way DNA is affected by environmental impacts such as those experienced during the Chernobyl disaster, with broad-ranging health implications. He has won the Royal Society’s Royal Medal for distinguished contributions to the applied sciences and the Copley Medal for outstanding achievements in science.

Dame Commander of the Order of the British Empire

Professor Amanda Gay Fisher, Director of the MRC Clinical Sciences Centre at Imperial College, has been made a Dames Commander of the Order of the British Empire (DBE)

[She] has made fundamental discoveries in the molecular biology of HIV, the genomic characterisation of stem cells and the study of epigenetic gene regulation. Her observations of the HIV-1 virus underpinned the complete molecular understanding of the HIV genome and were a basis for the subsequent development of antiretroviral drugs. She is a strong advocate and role model for women in science and has made a significant contribution to the public understanding of science and training and mentoring researchers.

Also recognised in the New Years Honours, as Knights Bachelor, are:

Professor Balasubramanian, Herchel Smith Professor of Medicinal Chemistry at Cambridge University, was co-inventor of Next Generation DNA sequencing, the most transformational advance in biology and medicine for decades. Solexa sequencing, as it is now known, allows an individual genome to be sequenced in a day or two at a cost of less than £1000; previously, sequencing the human genome took years of work and cost billions. His work has spawned an entirely new discipline of Bioinformatics. More recently, he has made major contributions to understanding the role of DNA-quadruplexes in cancer and invented a method for the sequencing of epigenetic modifications.

Professor McCanny is an international authority on silicon chip architectures for Digital Signal Processing and Digital Security, who led the initiative to create the Centre for Secure Information Technology, the UK’s Innovation and Knowledge Centre in Cybersecurity. He also developed the vision to create the Northern Ireland Science Park, which transformed a brownfield site into a science and technology hub where over 2,500 people are now employed. He has founded two high technology companies based on the work of his research teams and has served on numerous committees of the Royal Society, the Royal Academy of Engineering and the Royal Irish Academy.

Dr. Smith, Director of Science at the Wellcome Trust and Senior Group Leader at the Francis Crick Institute, is a scientific leader who has transformed our understanding of embryonic development, giving insights into genetic defects in children and how stem cells develop into different tissues. He played a leading role in the development of the Francis Crick Institute from its early beginnings to its establishment in 2015. Previously, as Director of the Gurdon Institute and then of the MRC National Institute for Medical Research, he provided leadership in UK science
across a breadth of disciplines and helped nurture the next generation of outstanding scientists, taking particular care to promote the careers of women.

Officer of the Order of the British Empire – Professor Anne Neville FREng – Royal Academy of Engineering Chair in Emerging Technologies, University of Leeds. For services to Engineering (West Yorkshire)

Member of the Order of the British Empire – Professor Iain Douglas Baikie – Chief Executive Officer, KP Technology. For services to the Promotion of Science Education in Caithness (Caithness)

Member of the Order of the British Empire – Ms Deborah Forster – Co-Chief Executive Officer, Apps for Good. For services to Digital Technology and Tech Development (Buckinghamshire)

Member of the Order of the British Empire – Mr Joseph Lawrence White – Entrepreneur and Angel Investor. For services to Technology Businesses (London)

You can read a highlight of the New Year Honours 2017 (High Awards) and see the full list at www.gov.uk/government/

Have we missed anyone off?

The list of honours is long and amongst some educational honours the citation doesn’t always includes the subject taught. If Electronics Weekly has missed anyone relevant, please comment below.