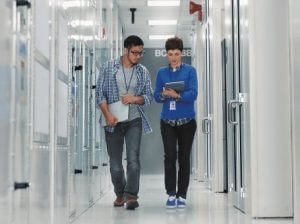 In an attempt to offset its continuing dominate of the computing market – both consumer and enterprise – the processor firm will present its views on applications ranging from virtual reality in healthcare to 5G mobile and drones.

It is no surprise that Intel also highlights the importance of the enterprise computing superstructure which will be increasingly vital for most consumer and IoT applications such as healthcare and connected vehicles.

“Just as regular checkups are important to your health and well-being, the same can be said for your data centre’s health. Preventative measures are critical to avoiding outages and downtime,” writes Jeff Klaus in his Intel blog.

The message is that when a data centre goes down it costs money. Big money.

“The Delta Airlines data centre outage that occurred in August, which grounded more than 2,000 flights over three days and cost the company $150m,” says Klaus.

“In view of the financial prognosis, how could companies not afford to employ a preventative health management approach in their data centres to catch issues before they spiral out of control and are deemed untreatable?”

The scale of the problem is daunting. With thousands of heterogamous servers in the typical data centre, there is the need for a tool to control and access these servers to maintain full availability.

Intel will present the monitoring, analytics and diagnostics tools it offers to address this enormous problem.

For CES 2017, the emphasis will be set by Intel CEO Brian Krzanich in his (4 January) keynote on virtual reality in all its guises.

But just as relevant will be Intel’s views on the now ubiquitous concept of the connected car.

The processor firm says it will take “a holistic approach” to in-car systems for automated vehicles.

Intel says it is also working on the human machine interfaces which will be important if passengers are to trust fully automated vehicles and feel “in control”.

On Thursday 5 January at CES, Gary Davis from Intel’s security division will be part of a panel discussion on the secure of connected devices with Dr. Zulfikar Ramzan for RSA and Suzanne Spaulding from the US Department of Homeland Security.

On a practical level, Intel has announced that the new release of its IoT developer kit 5.0 now incorporates Ubuntu support for its Joule development platform and IoT Gateway.

There is an IoT developer option aimed squarely at cross-over market segments between consumer and industrial, such as medical, fitness monitors and connected vehicles.