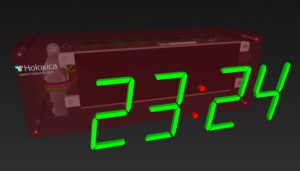 True three dimensional visualisation technologies have been fantasied and theorised about over the past half century. The scientific community and sci-fi fans know that the best way to make true 3D images is by using holographic technology.

Conventional stereo 3D is based wearables including polarising glasses or Virtual Reality (VR) headsets or Augmented Reality (AR) goggles. These technologies have fundamental limitations which makes them unsuitable for a true 3D experience.

This is because these technologies do not recreate a true 3D image, rather they present a pair of 2D images to both eyes. This stereo disparity leads to a poor 3D experience as it is fundamentally unacceptable to the human brain resulting in problems such as motion sickness, dizziness and nausea.

This is a serious problem that affects between a quarter to a third of the population. The glasses are can still be found in cinema but this is in decline whereas their use in television never took off. They are being replaced by VR headsets aimed at gaming, however, wider sales of these units have not taken off as expected beyond a small community of developers.

Wider public acceptance of face-covering headsets is dubious. For now, it seems like AR is likely to take the mantle and replace the 3D glasses and VR headsets. However, this solution still has the inherent limitations of all stereo 3D systems.

An ideal 3D display should not rely on any form of head- or eye wear. The scene or object should be presented in real space (floating in mid-air), allowing the viewer to look around objects and see them from a slightly different perspective, as they would in real life. This leads to a more comfortable and naturalistic viewing experience without all the problems of stereo 3D. Only holographic and similar technologies can offer a solution to this problem.

What is holographic 3D? The scientific definition of holography is image creation using the physical principles of diffraction. Most of us are familiar with the notion of reflections off a mirror and the refraction or bending of light in water or glass.

Diffraction occurs when light interacts with structures that are the same size or smaller than the light. Diffraction can reproduce both refraction and reflection effects, making it a powerful optical phenomenon.

Unfortunately, holography has not lived up to expectations, which were largely driven by the realms of science-fiction fantasy following the iconic Star Wars film in 1977. After almost forty years, we are still far from a commercially viable holographic 3D display.

The reason for this is such technologies require the use of nano-scale features over a large area to create diffraction. Most of the research in this area is performed by the military and high-end academic research facilities. The components tend to be very expensive and difficult to mass-produce.

Although the research community has made significant advances in recent years, the prospect of a true holographic display remains elusive. Instead of trying to create a mythical “Star Wars” display, Holoxica took a more pragmatic approach by asking “what is the simplest holographic display we can make?”.

The answer: a single pixel, or voxel, in 3D space, that can be switched on or off. We then move on to two voxels and worked up from there to 4 to 9 to 16 voxels and so on. Holoxica’s first-generation holographic display demonstrator in 2010 had up to nine voxels and could show simple numeric information.

The second-generation display, made in 2013, has a few 100k voxels, with freeform images floating in mid-air that can change in real time. The latest, third generation, display is being designed for medical imaging (CT and MRI scanners) with millions of voxels. The images are bright and visible under indoor lighting conditions, and the approach is scalable, leveraging existing manufacturing techniques and high-end components.

Hollywood continues to depict holographic displays as something ubiquitous in films from Iron Man to Avatar. This has created inflated expectations in the mind of the public who largely believe that displays or ‘holographic projectors’ already exist and its trivial to make them. This void that has been filled a great deal of ‘fake holographic 3D’, based on Pepper’s Ghost and similar optical illusions; otherwise known as “fauxlography”.

Any vague illusion of an image floating in space is labelled a hologram, whether it’s celebrities, politicians or a cardboard cut-out in an airport.

The time is now ripe for holography to claim its rightful place at the forefront of 3D imaging technology beyond “AR”. Holographic video displays are edging ever closer to commercial reality.

There is still some way to go and more investment is needed but it’s likely we’re going to get there sooner rather than later and certainly within the next five years.