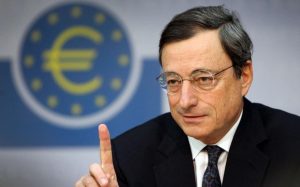 “No member state can introduce its own currency,” says Draghi, “the currency of the euro zone is the euro.”

Estonia is in the Euro-zone. Recently it floated the idea of the ‘Estcoin’ a national digital currency.

Vitalik Buterin, founder of the world’s second most valuable crypto-currency – Ethereum – is helping Estonia get the Estcoin off the ground. The Estcoin is seen as being useful for Estonia’s e-residents – non-Estonian nationals who register for Estonian e-residency to access the country’s legal and economic systems.

“An ICO (Initial Coin Offering) within the e-Residency ecosystem would create a strong incentive alignment between e-residents and this fund,” says Buterin, “if these Estcoins are issued on top of a blockchain it would become easy and convenient to use them inside of smart contracts and other applications.”

The ICO would raise money which could be put to work in Estonia for the public good.