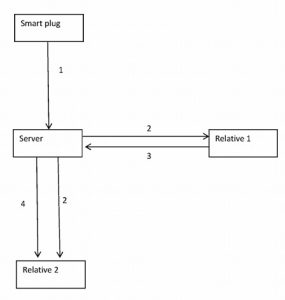 Care for the elderly is a major area of concern for society, particularly as advancements in medicine result in an increasingly aging population.

Telecare medicine is an area of growth and is supplementing traditional alarm call buttons which are worn on the wrist or around the neck.

A key objective is to support the elderly person to maintain an independent life whilst providing reassurance to relatives, friends and carers about their wellbeing.

One drawback of some common solutions in this field is that they require specialist and costly installation. The company 3Rings Care Limited has developed a neat solution which critically can be easily set up without disturbing the fabric of the client’s home.

Its device, which is described in GB patent no 2528644, was granted on 9 November 2016, and is a mains ‘smart plug’ adapter, similar to a time switch for controlling a lamp or similar device. The smart plug is inserted into a mains socket and a regularly used electrical appliance, such as a washing machine, television or kettle, is plugged into the smart plug.

The smart plug includes a current monitor for monitoring the usage of the main device. It also includes a transmitter, which may be WiFi enabled, although the patent recognises that many elderly people do not have WiFi, in which case a GSM transmitter would be more appropriate.

Since the smart plug monitors the electrical usage of the main appliance it can be used to monitor the usage of that device and detect unusual or no usage.

In the first instance, the current monitor is used to establish a pattern of usage for that individual, for example, a kettle being boiled at certain times of the day. Once the user’s routine has been established and the ‘learning’ process is complete, the smart plug can detect exceptions to normal behaviour and generate alerts, via a server, for the occurrence of an unexpected pattern of behaviour.

Alternatively, during the initial configuration period a default behaviour, based on the behaviour of other individuals in the client’s cohort or on an anticipated behaviour for that client, can be used as an interim behaviour model.

The device uses a very low bandwidth since it only needs to send a signal to the server when there is a change in the current drawn, so if a kettle is boiled four times a day this would generate only eight changes of state signals to the server.

Rules can be set at the server defining the action to be taken in response to specific behaviours. For example, the action taken and alerts generated may differ based on an absence or change of state event, or the occurrence of such events at unexpected times, for example in the middle of the night. Alternatively, when a smart plug detects the first activity of the day it can send a reassuring message that the client is now awake.

The ease with which this device can be installed and its inconspicuousness provide it with the ingredients for success.

Michael Jaeger is a partner and patent attorney at Withers & Rogers LLP, a leading firm of patent and trade mark attorneys.