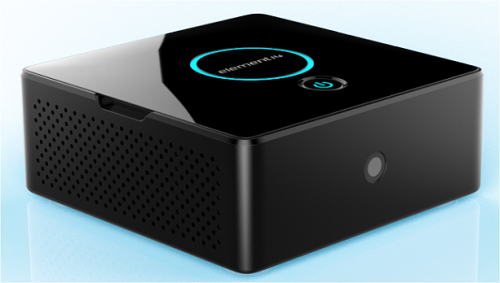 The set of accessories includes an add-on board containing the mSATA interface, intelligent power controller and RTC; the stylish-looking enclosure; a heat sink; a USB Adapter (Micro-Type A); the RTC battery; and “all the necessary spacers and screws”.

You would still need your own display for the linux-pwered system, of course, connecting via the HDMI interface.

When combined with the Raspberry Pi, the Pi Desktop provides users with all the functionality they would expect from a standard PC, including WiFi, Bluetooth, a real-time clock, an mSATA solid-state drive interface, an optional camera and a power switch (Solid-State Drive and Raspberry Pi Camera purchased separately).

The enhanced capabilities offered by the extended SSD memory capability (up to 1 Tbyte) make the system highly robust and reliable, and give the ability to boot the Raspberry Pi directly from the SSD leads to a high-speed start-up experience for users. The built-in power switch makes the Pi Desktop easy to operate. An intelligent and safe power controller means that users do not have to remove the power adapter from the Pi board; they simply turn the power on or off like a desktop or laptop.

With availability expected from June, it’s priced at £39.99.

I should also mention here the PiTop, which also ‘converts’ your Pi into a more traditional computer format.

For example, the pi-top resembles a laptop with its built in display and extra USB ports, and there’s a tablet like Pi-topCeed.

I should also mention that Ryan Dunwoody, one of the founders of PiTop, is one of the EW BrightSparks who was recently honoured this year.