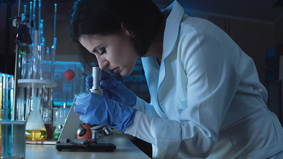 You don’t have to hang around the world of microscopes for long to discover an obsession with quality illumination. The incumbent light source is quartz‑halogen incandescent, although various specialist discharge lamps are also used.

LEDs are making inroads, which is no wonder, because halogen sources are often dissipating 50W-100W. But it is not a simple choice, because quartz‑halogen lamps have one big advantage: they are essentially black‑body radiators.

Optical microscopes are not all one thing. Some are called to do the same job every day – to count white blood cells, for example – and have a narrow range of lighting requirements. Others are general-purpose, and in these the required number of lighting options is ‘more’, to a first approximation. The observer might be looking directly into an eye-piece, or at a monitor connected to a microscope camera.

Sometimes excellent accurate colour rendering is required, where a halogen‑like experience could be important for seasoned users, and at other times the requirement is to get high contrast between what the user is looking for and the things they are not interested in, which requires an optimal combination of spectrum and illumination direction.

The first issue with halogen is protecting the sample from heat. “It carries a high load of infra-red which can be detrimental to any tissue sample or organic material, so you have to filter it out,” says Beech.

LEDs side-step this layer of filtering because the standard blue‑die‑plus‑phosphor technology doesn’t produce IR; but can an LED be designed to mimic the rest of the well‑behaved continuous halogen spectrum?

According to Plessey optical designer Samir Mezouari, it is possible if the right phosphor mix is chosen. “Most [LED firms] can mimic black-body emission spectrum. The challenge is getting the best efficacy,” he says.

And sufficient optical power is already available. “Our standard white LED is a 12V 8W 1,000 lm device with lens in a 7x7mm package,” says Beech.

This device has four junctions tiled in a square on a single die with almost no gap between the emitters – removing the ‘cross-hair’ artefacts that so trouble optics from normal multi-die emitters.

Large die single junction LEDs are also possible, although more current is needed, increasing the size or number of die bond-wires. These are a potential issue with microscope illumination because, even though ‘Köhler’ illumination minimises the effect, residual images of structures in the light source can appear superimposed on the view of the object.

Even with the necessary bond‑wires, the plain white square of an LED source beats the coiled filament of a halogen lamp. For very sensitive samples, LEDs bring another way to further reduce heat and infra-red: miniature flash photography.

“You cannot pulse halogen to reduce energy input,” says Beech, “but with LEDs you can. The light can be captured by a staring [always open] camera, so you can image samples that could not be photographed with halogen light bulbs.”

Spatial illumination is also easier with LEDs. Leica, for example, makes rings of LEDs to go around the objective lens of reflection microscopes, in which LEDs can be turned on in sectors around the ring. This creates light from one angle only, which can reveal surface features.

With their long service life, LEDs can be permanently built in to optical instruments, avoiding the realignment and collimation procedures needed when changing a burned-out halogen bulb. Space would also be saved, with no need for bulb-changing finger space and far less volume allocated for heat exhaust – although room for a heatsink has to be found.

Working on the contrast

A first step is replacing halogen with continuous‑spectrum LEDs. For contrast-enhancement, some microscopes include switchable optical filters between the light source and the sample, which can be replaced by multiple LEDs of various wavelengths.

“You don’t always want to image with uniform spectrum. For example, with blue illumination, red sample components become darker, so it can increase contrast,” says Beech.

“With LEDs, you can make a broad spectrum phosphor or make phosphor for red green and blue. Specifically for pathology, I would go for a choice of wavelengths,” he adds.

Mezouari says “Imagine a red‑green‑blue‑white LED – emitting some broad spectrum, with peaks at specific wavelengths. Then you can turn off, for example, red, to find a spectral recipe for a specific sample you are looking at.”

Post-camera digital image enhancement is an increasing part of microscopy, and Mezouari sees this combined with images taken at different wavelengths to get highly enhanced images. Choosing which wavelengths to include among the LED set depends on the job in hand, although if a camera is in use, Beech suggests matching red green and blue emissions to the RGB filtering of the camera chip.

At the extreme, increased resolution is available by using only short wavelength (blue) light, which is easily available from LEDs, and only available from halogen by filtering most of the energy away. Also there is some evidence that long-term exposure to intense blue light can be detrimental to the human eye.

Until the science becomes clearer, a precaution could be to limit light sources to halogen mimicry, or green wavelengths or longer, in situations where an operator could accidentally inflict a high dose upon themselves. Photo-biological exposure standards already exist for intense short-term exposure.

Doing away with broad spectrum illumination altogether could be a mistake, as a sample might just include a monochromatic material that does not coincide with the light sources.

For a multi-wavelength LED source, light has to be combined in some way. “You can use an array of micro-LEDs with a small diffuser to get hundreds, not thousands, of lumens – but enough,” says Mezouari.

“If you have enough space, use separate LEDs and a mixing rod a few centimetres long. Or if you have just red green and blue, you could use prism reflectors to mix, and sometimes a rod is added as well.”