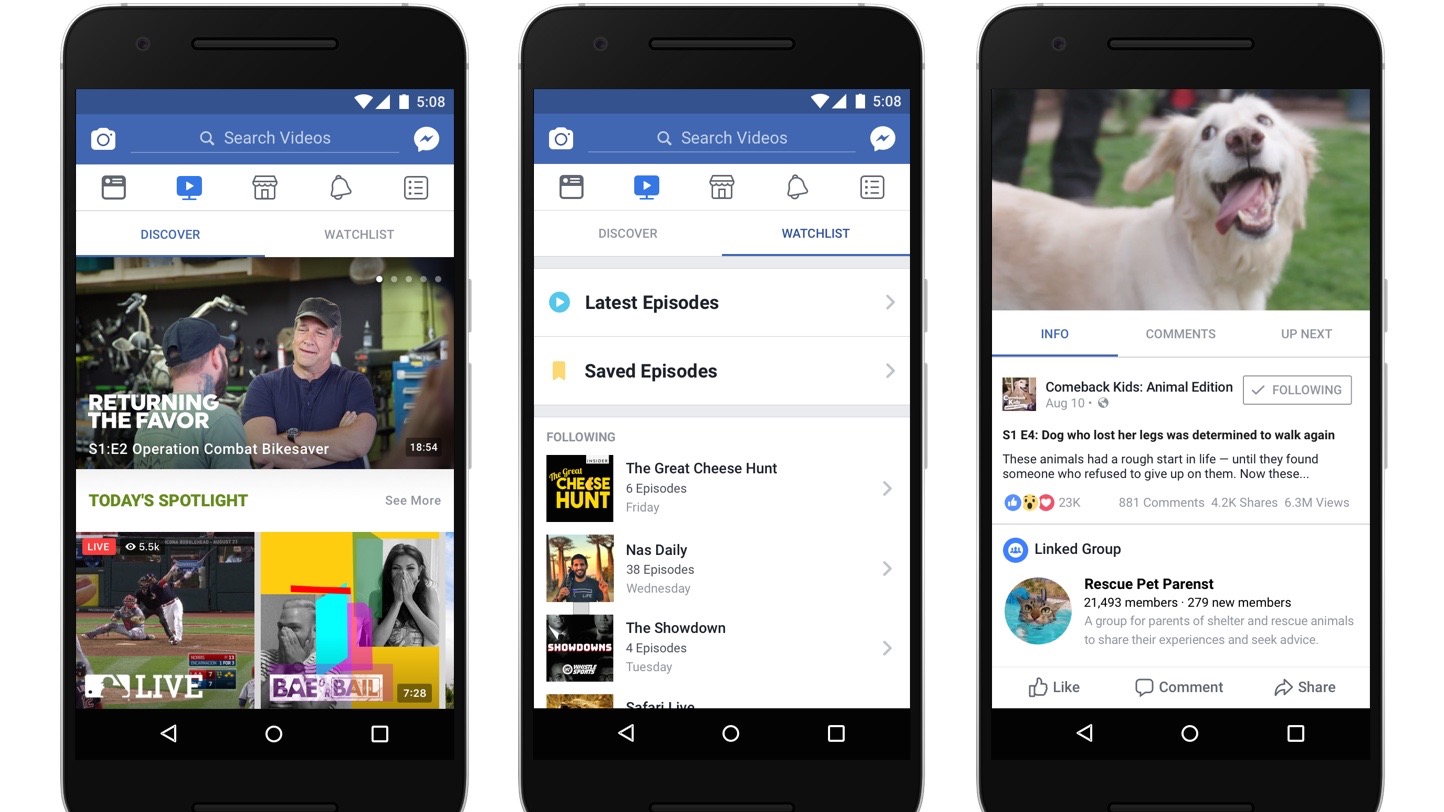 Say hello to Watch, a new platform on Facebook featuring original shows, including content funded by the mega social network itself.

Launching on Thursday to a small number of users in the US, Watch is a revamped, pumped up version of the US-only Video tab, which it’s also replacing. Through Watch, Facebook will serve up shows on iOS, Android, desktop, laptop and its TV applications.

Just like a typical television program, Facebook Watch shows will center on a theme or story line. These won’t be user-generated Facebook Live broadcasts, but rather professional-grade productions, including content from the likes of A&E, National Geographic, the NBA and Time, according to Variety. Some shows, of course, will be done live, or include live segments.

Every show on Watch includes a comment section, letting you follow the conversation and engage with your own hot take. This brings a social element to the mix, though live chat is a feature we’ve already seen on YouTube.

You’ll be able to keep tabs on your favorite programs through the Watchlist, and scope what your friends are tuning into or explore categories like “Most Talked About” and “What’s Making People Laugh” to discover more shows.

But Watch isn’t just about passively watching shows; it’s above all else a platform for creators to share a variety of content, much in the same way as YouTube.

However, to start with Facebook is limiting its Watch content creators to a small set of publishers. Eventually, the company plans to open it up and allow others to make shows, and people hanging out to do so can “register your interest in creating a show” here.

Facebook detailed the kinds of content it thinks will do well, breaking it down into a few categories as detailed in a blog post: shows that engage with fans and community, live shows that connect directly with fans, shows that follow a narrative arc or have a consistent theme, and live events that bring communities together.

This last bit goes directly after other services’ sports ambitions, as Facebook will broadcast one Major League Baseball game every week. Twitter previously live streamed Thursday night NFL games, however, it recently lost those rights to Amazon. Twitter now broadcasts a number of live programs throughout the day, including sports.

As for the content it’s backed, Facebook’s aim is to basically provide examples of what it thinks will work on Watch. Facebook tells us that, while it’s funding some shows directly right now, it will eventually cut back on the number as more shows come to the fore.

As if being broadcast on Facebook weren’t enough, the people featured in the show are nominated by Rowe’s Facebook fans. The circle, my friends, is complete.

Variety reports another program with Facebook’s backing is Ball in the Family, a reality show centered around the family of outspoken sports personality LaVar Ball.

In case there was any doubt, Facebook has every intention of having creators make money from their shows, and to that end some (presumably the successful ones) will have Ad Breaks.

Facebook says it wants to continue to provide a good viewing experience, so it will roll out Ad Breaks methodically. There’s also the opportunity for publishers to create sponsored shows.

Though starting out small, Facebook Watch has the potential to be a true YouTube and television competitor… if it can hit the right mix of content and keep viewers coming back for more.

We watch 100 million hours of video on Facebook already, but now it’s a matter of serving compelling content that’s worth users’ time, especially as ads are introduced.

The big opportunity for Facebook in monetizing Watch content is in ads, so it will have to ensure these aren’t so onerous as to turn viewers off. Again, this goes after YouTube – and Google’s – bread and butter, setting up a dynamic rivalry as Watch takes off.

Watch will roll out to more users “soon” after its initial limited release. Stay tuned.