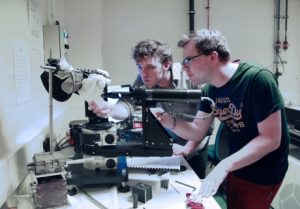 The gauntlet is part of the the Wallace Collection in London and conservators wanted to investigate a surface effect applied to the metalwork in swords and armour.

The effect is called blueing and was used by the armourer to prevent the steel from rusting.

This ‘blueing’ effect can be created in several different ways, including by applying heat or chemicals.

However, it can be difficult to know which method was used in older metalwork like armour or weapons, because the blueing is oxidised over time, and because many armourers kept their methods protected as trade secrets.

Dr Alex Mellor with colleagues from the Department of Physics at Imperial College London have already analysed the blueing of a sword blade from 1803, so they knew the method might work.

A challenge with the gauntlet its complex shape and the very small area of the surviving blued surface.

The method used is called spectroscopic ellipsometry, and involves studying the reflections of light from the surface of a material.

A monochromatic light beam is bounced off the material, and then analysed to see what changes occurred to the beam. 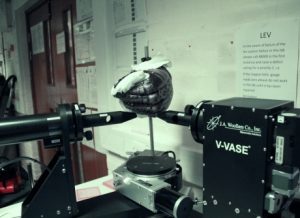 The gauntlet in the ellipsometer

When the linearly polarised monochromatic light beam interacts with a very thin film of material, the direction of the vibration of the light may be altered.

This is similar to the  effect which produces rainbows in soap bubbles, when the light interacts with very thin films of water.

“Usually, we use spectroscopic ellipsometry in our lab to look at the effect of different films applied to the surface of solar panels. If a film can help panels reflect fewer wavelengths of light, then more light, and more energy, can be collected.

“In this case, we were looking for the effect on the light that the thin film of blue produces. By comparing the signature from this experiment to those where the production method is known – such as 19th century guns, or sample strips of metal – we can determine how the gauntlet was blued.”

Initial results indicate that the bluing is solely the result of heating to around 250°C. If so this would fit with the conservators’ ideas of how the gauntlet was originally decorated. 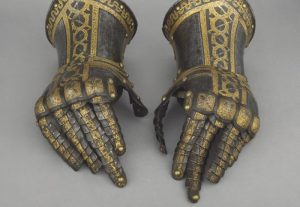 The gauntlets from a suit of armour. Image: Trustees of the Wallace Collection

“We think the blueing process could be associated with the intricate gilding on the gauntlet. Gilding involves chemical etching, followed by application of layers of copper and a gold-mercury amalgam, which when heated fixes the gold to the surface whilst removing the toxic mercury.

“It’s during this heating that the bluing could have occurred – coming as a happy side-effect of gilding.”

Heat treatment was also a method of hardening the metal armour as well as creating a very rich decorative appearance.