When I got to the Apple store there was a queue for the 7 so I bought a 6S.

It seemed to me there was unlikely to be much technical difference – two years of Moore’s Law delivers little these days.

So it’s  reassuring to see ScientaMobile state that the 6S is the most used smartphone in the world. 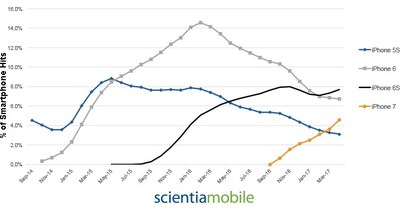 The iPhone 6S became the most used in February 2017 and is now at almost 8% of all global smartphone browsing, says ScientaMobile.

Today, the iPhone 6S usage continues to grow despite the iPhone 7 launch.

The downside for Apple is, of course, the downwards trajectory of the iPad. If you have an S-sized iPhone, most people probably feel they don’t need a tablet as well.

As for phones, without the prospect of much progress on the IC technology, Apple probably has to develop new functions – particularly bio-functions like health monitoring – if it is to be able to attract customers wanting to regularly replace their phones.