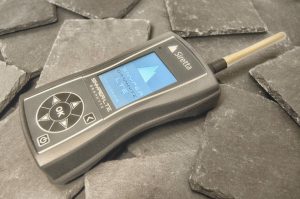 Called Snyper-LTE Graphyte, it works on 2G, 3G and LTE networks and is intended to be used in the field when setting up IoT or M2M devices that use cellular communication.

“It scans across all frequencies and all providers and tells you which MNO [mobile network operator – for example Vodaphone] gives the strongest signal where you are,” company MD Stephen Sydes told Electronics Weekly. Then a facility called ‘LiveScan’ lets the user watch the signal from the selected operator as it varies with time on the display – for example to assist with antenna alignment.

This was possible with earlier versions, but always needed an operator present. With the Graphyte version, data logging allows the unit to be left behind to log between five and 500 scans (of all networks) at intervals between five minutes and 24 hours. “In theory, it could do 500 surveys over 500 days, but no one is going to want to do that,” said Sydes.

More likely, he said, are surveys over a day or a week: “if you are near a school, you can see availability dip when the kids come out and turn their phones on at three o’clock. You won’t want to do your daily download then.”

Survey results are saved automatically and at the end of the surveying period an overview is instantly available. Time-stamped logs of cellular signal strengths can be downloaded as required via the device’s built-in USB port for analysis in a standard spreadsheet, or graphical HTML format. Via an MNO summary table, the number of operator base-stations at defined signal level are available.

The internal battery gives 48 hours of logging, or the unit can be attached to a USN charger for longer operations.

“There is nothing else on the market that competes directly with this for 4G networks – there is some bench-top equipment that cost five times more,” said Sydes, who added that this is also the only multi-lingual network analyser – it can be set to display in English, French, German, Italian and Spanish.

The antenna port allows different antennas to be tried to optimise reception at the location and, said Sydes, this facility makes the instrument attractive for lab use.

Earlier versions always needed a SIM card for network access – no credit was used during operation, but the card still had to be bought, and with some cards a monthly fee was payable.

Using knowledge built-up from the firm’s cellular modem business “we found a ways to interrogate the network without registering”, said Sydes. “I am not saying how we do it, but that is the reason the Graphyte doesn’t need a SIM card.”

The units are assembled and tested in the UK – Siretta’s HQ is in Reading), with main PCBs made in the UK or Eastern Europe.