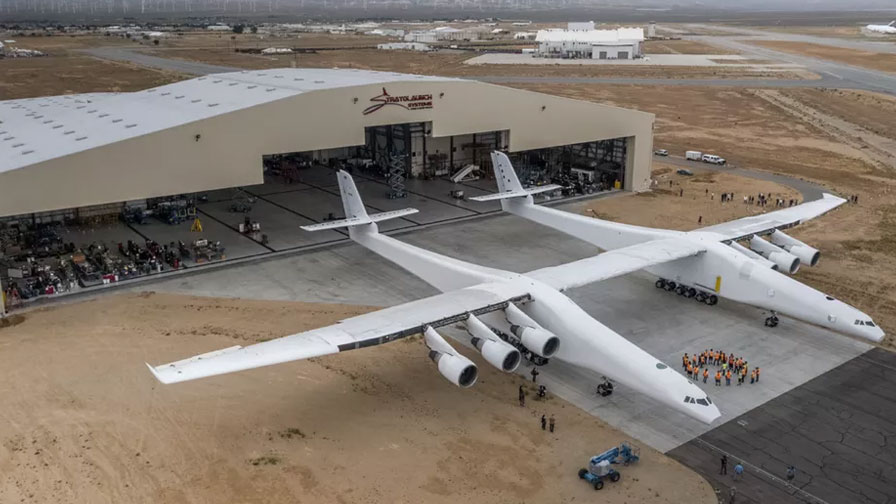 Paul Allen, one of the co-founders of Microsoft has been secretly working on a pet project of his own. Today we get to know more about it, thanks to pictures posted online. Allen owns a company called Stratolaunch Systems, which builds mammoth aircraft to carry rockets and launch them into outer space. As you can probably see from the picture, this is easily the biggest plane in the world.

The plane, known simply as the Stratolaunch aircraft, officially made an appearance for the world as it made its way out of a hangar in the Mojave Desert, near southeastern California. The aircraft has a wingspan of 385 feet, which is easily bigger than any other airplane currently available. The company claims that it can carry a weight of about 1.3 million pounds (589,670 kilograms). The plane packs six Boeing 747 engines on board and runs on 28 wheels.

Surprisingly, the company hasn’t finished testing the aircraft as of yet. The company’s goal today was simply to bring out the aircraft and see if it can support itself. The company aims to conduct the first demo flight by sometime in 2019, assuming everything goes well between now and then.

Allen was previously involved with a company called SpaceShipOne, which had a similar idea. This was even used as a reference design for Virgin Galactic, a spaceflight venture by business tycoon Sir Richard Branson.

The idea behind using an aircraft instead of a proper launch pad is to cut costs and give the rockets a head start while airborne. While it’s surely an ambitious project, we’re still quite some distance away from seeing it take off.