Microsoft recently took a pasting, for example, but Google and Apple are only ranked just higher. And HP and Dell lead the way for repairable devices, behind Fairphone. Xiomi, LG, and Acer are the next group. 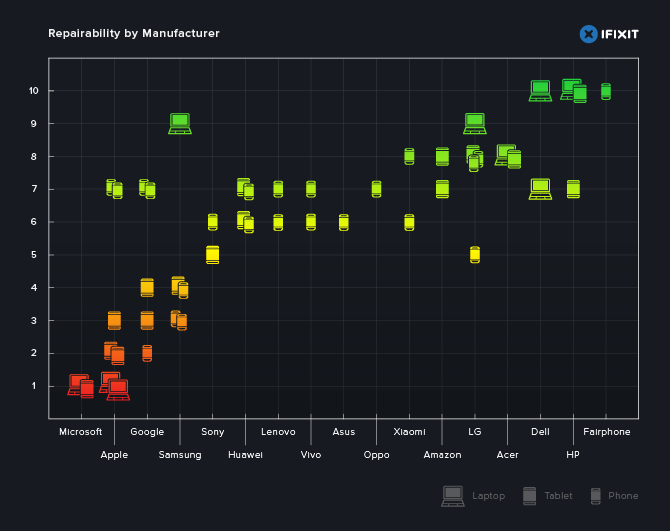 The report is called How Repairable is Your Mobile Device?

Overall, they looked at 40 best selling smartphones, tablets or laptops, launched between 2015 and 2017, which were produced by 17 brands. The assessment is based on iFixit’s repairability score, which considers the time required to repair the product, the device’s upgradability and modularity, as well as the availability of spare parts and repair manuals.

The assessment is based on iFixit’s repairability score, which considers the time required to repair the product, the device’s upgradability and modularity, as well as the availability of spare parts and repair manuals. 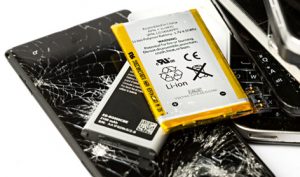 I’m also surprised – not exactly sure why – by the high repairable ranking of Amazon devices. Maybe I expected margins to be squeezed, at the expense of environmental/repairability considerations. I don’t know what Apple or Google’s excuse would be, on that score…

Anyway, check our the graphic above for yourselves.

“Of all the models assessed, we found a few best-in-class products, which demonstrate that designing for repairability is possible,” said Gary Cook, IT Sector Analyst at Greenpeace USA. “On the other hand, a number of products from Apple, Samsung, and Microsoft are increasingly being designed in ways that make it difficult for users to fix, which shortens the lifespan of these devices and adds to growing stockpiles of e-waste.”

“Improving the repairability of electronic products is technically achievable and brands should be prioritising this in their product design. As a first step, it’s critical that all brands follow in the footsteps of Dell, Fairphone, and HP and make repair manuals and spare parts publicly available.” 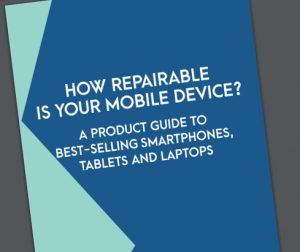 Key findings of the report cover a worrying trend away from repairability (design complexity, combined with the practice of soldering or gluing separate pieces together, means repairs take longer), the use of non-replaceable batteries (nearly 70% of all devices tested had batteries that were impossible or difficult to replace due to design decisions), non-standard tools being required (for working with proprietary screws, for example), and no access to repair manuals or spare parts (out of the 17 brands represented in the survey, only three – Dell, Fairphone and HP – provide all spare parts and repair manuals).

“Electronics take a massive amount of energy, human effort, and natural resources to make,” said Kyle Wiens, CEO of iFixit. “And yet, manufacturers produce billions more of them every year – while consumers keep them for just a few years before tossing them away. E-waste is one of the fastest growing waste streams in the world. We should be able to make electronics a more sustainable part of our lives.”

Check out the 28-page How Repairable is Your Mobile Device? report (PDF) »