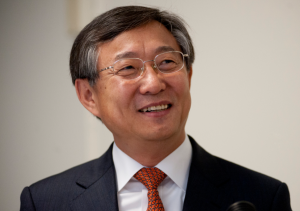 “Hydrogen has been talked about as the ultimate solution for zero emissions in the auto industry for decades,” says Wang, “there was reluctance because the technology of fuel-cell vehicles wasn’t mature enough, but now it is.”

Hyundai has hooked up with Audi to develop the technology.

Hyundai says the cost of the technology has halved in the last five years.

Market acceptance has been less than enthusiastic.

The Hydrogen Council, where Wang is co-chair, sees 6.4 million hydrogen fuel cell-powered cars on the roads by 2030.

Apart from cars, the Council is predicting that 18% of the world’s energy will be provided by hydrogen by 2050.