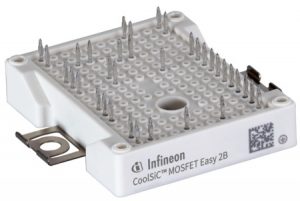 “Silicon carbide has reached a tipping point: Taking cost-benefit analysis into account, it is ready for use in a variety of applications,” says Infineon’s Dr.Peter Wawer.

The 1200 V SiC MOSFETs have been optimized to combine high reliability with performance. They show dynamic losses which are an order of magnitude lower than 1200 V silicon (Si) IGBTs.

First products will initially support upcoming system challenges in applications such as photovoltaic inverters, uninterruptible power supplies (UPS) and charging/storage systems. The new configurations will also enable new solutions in industrial drives, medical technology or auxiliary power supplies in the railway sector in the near future.

One major advantage of the trench technology with the 1200 V SiC MOSEFT lies in an extended robustness. This is due to the lower failure in time (FIT) rate and the short-circuit capability, which can be adapted to the respective application. Thanks to a threshold voltage (V th) of 4 V and the recommended switch-on threshold (V GS) of +15 V, the transistors can be controlled like an IGBT and safely switched off in the event of a fault. The SiC MOSFETs enable very fast switching transients. In addition, Infineon’s technology offers an easy adjustability of the transients via gate series resistors. The EMC behavior can thus be easily optimized.

The CoolSIC modules are

EASY 1B with B6 (Six-Pack) topology: the module is characterized by the proven Infineon module configuration with an on-resistance (R DS(ON)) of only 45 mΩ. An integrated body diode ensures a low-loss freewheeling function. The EASY 1B is suitable for applications in the fields of drives, solar or welding technology

EASY 2B with Half-Bridge topology: this larger EASY device offers an enhanced performance with an R DS(ON) of 8 mΩ per switch. The low-inductance module concept is ideal for applications with more than 50 kW and fast switching operations. These include solar inverters, quick-charging systems or solutions for uninterruptible power supplies.

62 mm with Half-Bridge topology: an additional Half-Bridge configuration featuring even higher power with an R DS(ON) of 6 mΩ per switching function. This module platform offers the possibility of low-inductance connection of systems in the medium power range. A great variety of applications make use of this, including medical technology or auxiliary power supplies in the railway sector, to name a few. Because of the large number of possible applications, Infineon anticipates a rapid spread of this module.

EASY 1B and the two discrete devices TO-247-3pin and -4pin, are gradually entering volume production during this year. The Half-Bridge configuration for the EASY 1B is now available. Its market launch is supported by various driver modules and demo boards, which are also available from now on. The new product configurations are available as samples, and the serial start is planned for 2018.