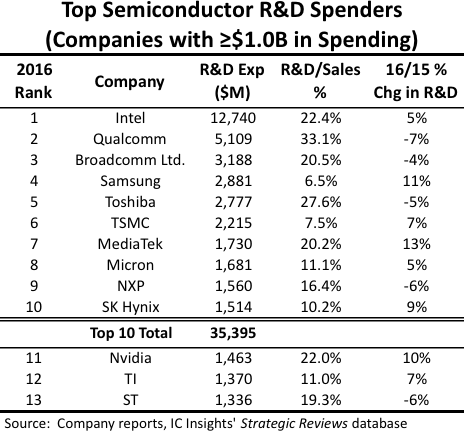 Intel’s R&D spend exceeded the combined R&D spending of the next three companies on the list.

However, the company’s R&D expenditures increased only 5% in 2016, which is below its 9% average increase in spending per year since 2011 and less than its 8% annual growth rate since 2001, says IC Insight’s McLean Report 2017.

Underscoring the growing cost of developing new IC technologies, Intel’s R&D-to-sales ratio has climbed significantly over the past 20 years.

Among other top-10 R&D spenders, Qualcomm—the industry’s largest fabless IC supplier—remained the second-largest R&D spender, a position it first achieved in 2012. Qualcomm’s semiconductor-related R&D spending was down 7% in 2016 compared to an adjusted total in 2015 that included expenditures by U.K.-based CSR and Ikanos Communications in Silicon Valley, which were acquired in 2015.

Broadcom – which is the new name of Avago Technologies after it completed its $37 billion acquisition of  Broadcom in early 2016 – was third in the R&D ranking. Excluding Broadcom’s expenditures in 2015, Avago by itself was ranked 13th in R&D spending that year (at nearly $1.1 billion).

Memory IC leader Samsung was ranked fourth in R&D spending in 2016 with expenditures increasing 11% from 2015.

Among the $1 billion-plus “R&D club,” the South Korean company had the lowest investment-intensity level with 6.5% of its total semiconductor revenues going to chip-related research and development in 2016, which was up from just 6.2% in 2015.

Toshiba moved up two positions to fifth as it aimed its R&D spending at 3D NAND flash memories.

TSMC)p was sixth with a 7% increase in 2016 R&D spending, followed by fabless IC supplier MediaTek, which moved up one position to seventh with 13% growth in R&D expenditures.

Micron advanced from ninth to eighth in the ranking with its research and development spending rising 5% in 2016.

Rounding out the top 10, NXP in Europe was ninth in 2016, slipping from sixth in 2015 and SK Hynix grew its R&D spending 9% to complete the list. Fabless Nvidia just missed the cut with a 10% increase in expenditures for research and development.

The slowdown in industry-wide R&D spending growth also corresponded with weakness in worldwide semiconductor sales, which declined 1% in 2015 and then recovered with a low single-digit increase in 2016.