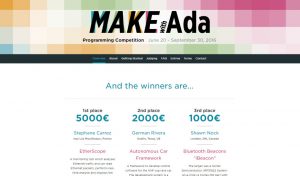 The compo was organised by Adacore, a software development tools company, and there were some very interesting entrants (you an see the prokject logs via the links below).

The first prize of €5000 went to Stephane Carrez for his EtherScope monitoring tool that analyses Ethernet traffic. Running on an STMicroelectronics STM32F746 board (Cortex M7), it reads Ethernet packets, performs real-time analysis, and displays the results on a 480×272 touch panel. The EtherScope interface can filter the results at different levels and report various kinds of information.

“I’ve been using Ada for several years on a variety of Open Source projects,” said Carrez. “But this was my first experience with Ada on a bare metal target, and that gave me the opportunity and motivation to learn more about the Ada Ravenscar profile.”

“Receiving First Prize for the EtherScope project was a great honour to me, and I want to thank AdaCore for sponsoring this competition. Developing Open Source software in Ada on ARM has proved to be rewarding in multiple ways.”

Watch the video below to see EtherScope in action.

The second place prize of €2000 was awarded to German Rivera for his framework to develop control software for the NXP cup racing car. The development system is a miniature racing car chassis coupled with a FRDM-KL25Z board and a TFC-shield board. The car kit also includes two DC motors for the rear wheels, a steering servo for the front wheels and a line scan camera. The microcontroller is an NXP Kinetis KL25Z chip, with Cortex-M0+ core, 128KB of NOR flash and 16KB of SRAM. See right.

The third place prize of €1000 was awarded to Shawn Nock for his Bluetooth Beacons (“iBeacon”) project. The target was a Nordic Semiconductor nRF51822 System-on-a-Chip (a Cortex-M0 part with integrated 2.4GHz Radio) with a custom development board. The evaluation kit for the nRF51822 is pictured, right.

Two special prizes (Crazyflie 2.0 nano drones) were also awarded. The Robert Dewar Special Prize for dependability went to German Rivera for his IoT Networking Stack project for the NXP FRDM-K64F board. The Lady Ada Lovelace Special Prize for inventiveness was awarded to Sébastien Bardot for his Explorer and Mapper Robot project, which uses a Nucleo F411RE board based on stm32f411re chip from STMicroelectronics.

The competition ran from 20 June to 30 September, 2016 and attracted 38 entries, say the organisers. Each entrant needed to design and implement an embedded software project for an ARM Cortex M or R processor, using Ada and/or SPARK as the principal language technologies. They also had to show that their system met its requirements and was developed using sound software engineering practices.

“We were delighted to see the breadth and quality of the projects that were submitted, ranging from food dehydrators to robots to electronic power supplies,” said Cyrille Comar, AdaCore President and one of the judges for the competition. “It was also fascinating to see the diverse backgrounds of the entrants and the variety of ARM platforms that were used. It shows that Ada technology can help anyone build reliable and secure embedded software without severe constraints on the hardware choices.”

Created in the 1970s, Ada is a structured, strongly-typed language (extended from Pascal) with support for explicit concurrent operation. There’s also features such as synchronous message passing and the use of protected “objects”.

Originally targeted at embedded and real-time systems, it’s most widely used in critical systems in avionics and military applications.