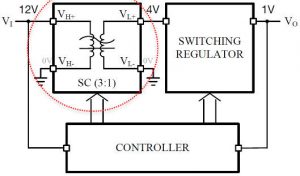 But exactly what the firm’s unique technology is, has remained under wraps.

Now Electronics Weekly has been given a peep behind the scenes by company CEO Gary Davison.

The switched capacitor part (red circle) can work where its efficiency is best – generally at whole division or multiplication ratios. It is virtually lossless irrespective of conversion ratio, claims Arctic.

Meanwhile, changing the operating point of the inductive converter allows efficient operation away from exact input/output ratios – where switched capacitor operation can be particularly inefficient.

Essentially, it is a transformation stage followed by a regulator.

Why not just do the whole thing inductively?

“The capacitors do most of the work, enabling greatly-reduced inductor sizing,” said Arctic, adding that efficiency is virtually independent of the difference between input and output voltage.

Added advantages, according to Davidson, are that is is built on a low-cost 180nm CMOS BCD process using only low-voltage FETs.