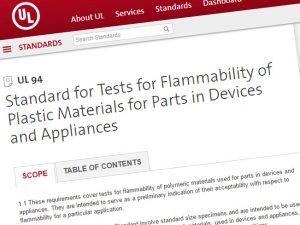 This week I am going to give you an overview of the different flammability ratings used in cables. The aim of which is to help make better choices when selecting cables that best fit their end location or environment.

Firstly, what is a flammability rating? The official definition is:

“UL 94, the Standard for Safety of Flammability of Plastic Materials for Parts in Devices and Appliances testing, is a plastics flammability standard released by Underwriters Laboratories of the United States. The standard determines the material’s tendency to either extinguish or spread the flame once the specimen has been ignited”.

Here are three common types and their intended use…

Cable that is run in the plenum spaces of buildings. In building construction, the plenum (pronounced PLEH-nuhm) is the space that is used for air circulation in heating and air conditioning systems, typically between the structural ceiling and the suspended ceiling or under a raised floor.

The plenum space is typically used to house the communication cables for the buildings computer and telephone network(s). However, use of plenum areas for cable storage poses a serious hazard in the event of a fire as once the fire reaches the plenum space there are few barriers to contain the smoke and flames. Plenum cable is coated with a fire-retardant coating (usually Teflon) so that in case of a fire it does not give off toxic gasses and smoke as it burns.

Cable which is to be run between floors in non-plenum areas is rated as Riser cable. The fire requirements on riser cable are not as strict. Thus, plenum cable can always replace riser cable, but riser cable cannot replace plenum cable in plenum spaces.

Low Smoke Zero Halogen (LSZH) rated cable is used in tunnels, ships and computer networking rooms where toxic or acrid smoke and fumes can injure people and/or harm equipment. Examples of halogens include fluorine, chlorine, bromine and iodine. These materials, when burned, produce acrid smoke that can cause harm to people and equipment.
LSZH Cables self extinguish and do not produce heavy black soot and smoke common with PVC cables.

I hope this has been helpful and you may be possible be re-thinking if the cables you are currently using are the right spec! Don’t worry your local cable assembly experts are here to help!