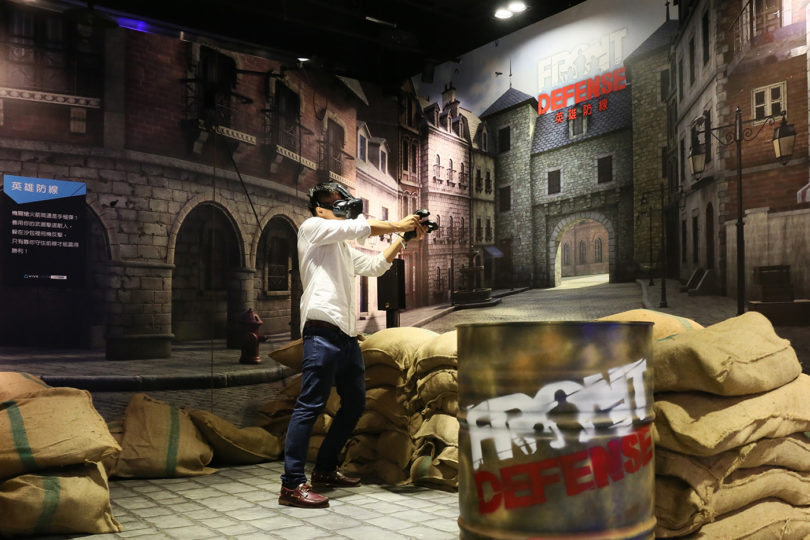 The VR theme park, being dubbed VIVELAND, spans over 3,500 square feet in a Taipei technology shopping center in the capital city of Taiwan. Built in collaboration with the Ministry of Economic Affairs, Syntrend, AMD, and gaming accessory manufacturer SteelSeries, the VIVELAND theme park is the first of its kind in Taiwan.

Apparently the space is setup like an arcade and you can play with various scenarios, paying for time slots of the VR experience. 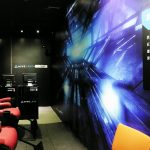 The website says their are four themed zones. As well as the Front Defense, previously mentioned, there are racing simulators in Project Cars, a “fear-inducing high-rise simulator The Walk”, and Bounty VR, which is described as being in 4D (you are driving spaceships in a haptic seat).

How much does the VR experience cost? Upload VR reports as follows. There are ‘Closed Booth’, ‘Open Booth’, ‘Front Defense’, ‘Project CARS’, ‘The Walk’, ‘Bounty VR in 4D’ and ‘Mixed Reality’ options, with pricing starting from NT$400 ($13) per 30-minute session. 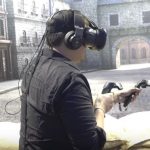 It’s easy to mock, as we Brits often do, but it has the sniff of the future about it. Entertainment is all about ‘engagement’ and surely the more immersive the experience the more engagement there can be. 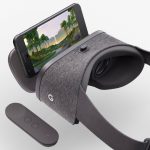 At a recent Google event the company was showing off it’s new VR headsets. Google Cardboard was its previous low-fi offering but Google Daydream VR addresses a slightly higher end of the market.

The new headsets are expected to be available in the UK in a couple of weeks for around £70 (note, however, they are only compatible with Google’s new Pixel and Pixel XL smartphones).

It certainly was fun, for example, to experience the halls of the Natural History Museum, in London, all flooded with water and dinosaurs swimming by…