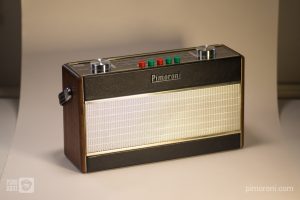 This was done using their own add-ons, a Speaker pHAT connected to a Pi Zero, the buttons connected straight to the Pi’s GPIO, and the dials connected to the ADC (analogue to digital converter) on an Enviro pHAT.

“Inside, the R600 really was a marvel. The circuit boards look to have been hand-drawn, and the resistors and capacitors have hand-painted bands on. Most of the space inside was taken up by the ferrite rod aerial for AM and SW radio, and the speaker.”

“It’s worth noting that you should take some care when desoldering the wires from the speakers, and the solder joint holding the circuitry to the metal part of the chassis, since it will be lead solder. We used a separate soldering iron tip and discarded it after use.” 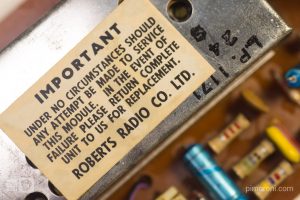 The keep the radio’s original character they were not tempted to add LEDs or LCD displays and fitted new rotary potentiometers and mini momentary push buttons, caps and brushed aluminium knobs.

As the original radio was battery power, a USB A to micro B cable was incorporated to power the Pi Zero.

We think it’s great that  it still looks like a classic radio, albeit with a Pimoroni twist!