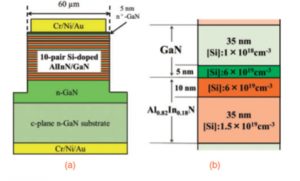 Such lasers include Bragg reflectors – multiple alternating layers of two materials, transparent at the frequency of concern, of differing refractive index. By forming layers of the right thickness, together they form the highly reflective wavelength-selective mirrors needed around the laser cavity.

AlInN and GaN have the correct refractive characteristics, improve reflectivity because they are lattice-matched (unlike AlGaN-GaN pairings), but are insulating and so cannot carry power to the emissive junction within the laser cavity.

Separate conductive structures can be added, but increase complexity, can reduce the amount of energy confined in the cavity, and are tricky to make with sufficient conductivity.

“So far the structures designed for commercialising these devices have poor conducting properties, and existing approaches to improve the conductivity introduce fabrication complexities while performance is inhibited,” said the Japan Society of Applied Physics (JSAP), which is publicising the research.

N-doping with silicon would make them conductive, except that polarisation charges between AlInN and GaN layers kill conductivity at the material interfaces, said the researchers.

To neutralise the effects of polarisation charges, Takeuchi and colleagues used silicon n-doping, but modulated doping levels where the layers meet (see diagram).

This worked, and different lasers were built and tried, with up to 46 layer pairs in their reflectors.

It was found that 405nm (blue) reflectivity of >99.9% could be achieved, with sufficient conductivity for continuous room temperature lasing with an operating current of 2.6mA (5.2 kA/cm2) while dropping only 4.7V.

A drawback of using AlInN is that it can only be grown slowly.

As part of the programme, the research team managed to boost AlInN growth above 0.5μm/h.