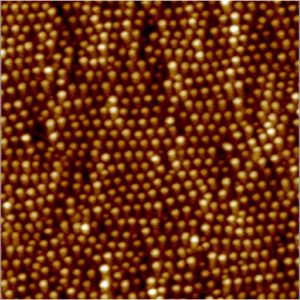 “The idea of adding nano-particles to increase LED efficiency is not new, but previous efforts to incorporate them have been impractical for large-scale manufacturing,” said the University. “They focused on pricey metals like silver, gold and platinum. Furthermore, there was no cost-effective way to incorporate particles below the surface.”

The researchers worked with gallium arsenide, irradiating its surface with a focused beam of gallium ions.

Self-assembling arrays of similar sized gallium particles grew, with, amongst other things, the beam angle with respect to the substrate controlling the eventual particle size and population density. 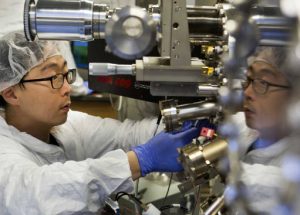 The surface including its particles were then buried under another layer if GaAs using molecular beam epitaxy – which, in this case, grew poly-crystalline GaAs.

Various combinations of particle size and burial layer thickness were tried, with the emissive characteristics measured by photo-luminescene.

It transpired that the underlying high quality underlying single crystal GaAs emitted better than any polycrystalline surface that was deposited on top without nano-particles, but certain combinations of particle size and deposited polycrystalline layer depth were best of all.

For example, 40nm particles covered by 40nm of polycrystalline GaAs was a winning combination. A deeper top layer then reduced emission.

“If you carefully tailor the size and spacing of nano-particles and how deeply they’re embedded, you can find a sweet spot that enhances light emissions,” said researcher Myungkoo Kang.

According to Michigan, the formation of such metallic particles on semiconductors has been seen before, as a nuisance during chip making when process control was poor.

“We realised that those ‘mistakes’ are very similar to the particles that manufacturers have been trying so hard to incorporate into LEDs. So we figured out a way to make lemonade out of lemons,” said project leader Professor Rachel Goldman.

“This is a seamless addition to the manufacturing process, and that’s what makes it so exciting,” she added, “the ability to make 3-D structures with these nano-particles throughout is going to open a lot of possibilities.”

Gallium has been reported elsewhere to produce plasmon responses tunable from near infra-red to ultra-violet, said the University, and Goldman’s team is adapting its technique the gallium nitride used in lighting LEDs where it could “could boost the efficiency of LED lighting by 50%”.

The work is published as ‘Formation of embedded plasmonic Ga nanoparticle arrays and their influence on GaAs photoluminescence‘ in the Journal of Applied Physics.