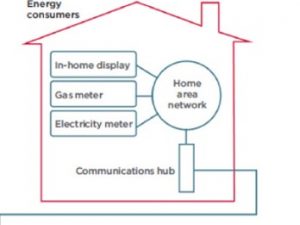 The researchers said that a lack of consumer engagement and insufficient information is slowing down the UK’s £11bn energy smart meter roll-out.

“This research contains serious inaccuracies and omissions which paint a misleading picture of the smart meter rollout and the benefits to consumers,” asserted a Smart Energy GB spokesperson.

The organisation was set up by the Government to advocate the take-up of smart gas and electricity meters. It includes consumer representatives, and is funded by energy suppliers but is not involved itself in the installation of smart meters.

“Independent surveys of tens of thousands of consumers each year show that Smart Energy GB’s campaign has made a significant impact on awareness of smart meters, their benefits and how to get one installed. Nearly all – 97% – of the population of Great Britain are aware of smart meters, with more than three quarters of people who have a smart meter saying they would recommend one to others. And many more would like to get their smart meter installed soon, with 49% of those who haven’t yet upgraded – or more than 20 million people – saying they would like to get one in the next six months.”

“It’s also important to note that, contrary to the research, you do not need internet access in your home to have a smart meter.”

Professor Benjamin Sovacool, lead author of the study and director of the Sussex Energy Group, said the government was backtracking on its ambitions for installation.

“Millions of people around the country are already using smart meters to bring their energy bills down. They are fitted at no additional cost, exactly as our old analogue meters were. The government’s most recent cost benefit analysis shows that by 2020 the average household will see annual savings on their energy bills of around £11 increasing to around £47 by 2030 thanks to the smart meter rollout. The government and Ofgem have said that they expect energy suppliers to pass any savings onto consumers.

Smart Energy GB says it wasn’t contacted prior to the publishing of the research. It pointedly offers its services to the university to “fact check their report”.

The full study by Sussex University is available for free until the end of September.