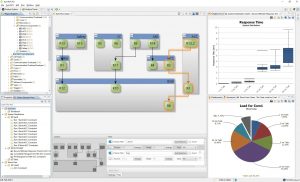 For ECU timing analysis, Symtavision 4.0 includes a new data flow visualization capability in the SymTA/S toolset, which allows fast and easy analysis of the software and communication architecture. With the help of interactive filters, the data flow graphs can be tuned to show the right level of abstraction enabling full exploration of system performance at the function architecture level.

Symtavision 4.0 also includes extensions to the Ethernet network timing analyses in SymTA/S. Buffer occupancy in Ethernet switches can now be undertaken at the buffer level, allowing the validation of switch memory and thereby reducing the risk of dropped frames due to buffer overflows.

This is supported in both simulation (system distribution) analysis and worst-case analysis. The addition of end-to-end jitter metrics provide an early hint as to the real-time capability of individual messages and helps to identify potential data losses at the receiver.

Worst-case latency analysis has also been extended to cover Ethernet AVB and support is now provided for AUTOSAR 4.2 Ethernet models, including SOME/IP. For CAN networks, a new dashboard is available that provides a quick overview of the status of a network.

To support the automated testing of automotive ECUs and networks (CAN, FlexRay, Ethernet), both the SymTA/S TraceAnalyzer tools in Symtavision 4.0 offer advanced comparison of actual versus target behavior, facilitating fast verification of measurements against the expected behavior from the model. Additionally, the new activation pattern extraction feature allows quick modeling of non-periodic behavior, such as interrupt triggering or sporadic frames, from traces.

The Symtavision 4.0 tool suite offers usability improvements, including updated interfaces to trace tools such as Gliwa, iSYSTEM and Lauterbach, and copy-and-merge of elements between models.