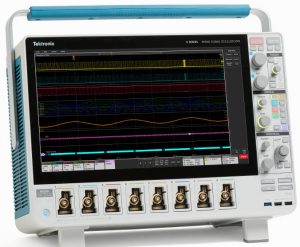 Called ‘5 Series’ MSO, analogue resolution is 12bit, and the analogue channels can be traded for up to 64 digital channels via a new front panel connector dubbed ‘FlexChannel’ (see below). At the heart of the instrument is a new asic which combines traditional ADC, demultiplexer, trigger and digital acquisition components in a single device – amongst other things, cutting front-end noise by ~4.5dB compared with earlier mid-range Tektronix MSO offerings, and increasing integration between analogue and digital channels.

As well as 12bit ADCs, there is a 16bit mode for lower frequency signals. “A DSP filter is applied at each sample rate that limits bandwidth and thus, noise, providing a more accurate view of the signal,” said the firm.

The touch screen is 1,920 x 1,080 with capacitive touch and “a user interface actually designed for touch”, said the firm. It has pinch, zoom and swipe, as well as working with a mouse.

Configuration menus are accessed by double tapping relevant items on the display, and are transparent and movable in case they are blocking something of interest. 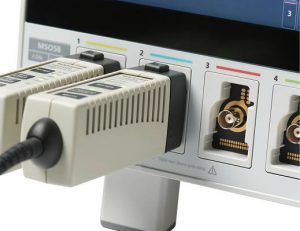 The FlexChannel connection enables each input to be configured as either one analogue channel or eight digital channels, and any combination of analogue and digital probes is supported. By default, the input is a TekVPI+ connector, that accepts TekVPI analogue probes, but the input converted to eight digital channels by connecting the new TLP058 logic probe.

“Until now, oscilloscopes have been defined with fixed configurations: the user had to decide up front how many analogue channels and whether they want zero or a fixed number of digital channels. Some scopes offer the option of adding digital channels post-purchase, but even then, it’s a fixed quantity of digital channels that can’t be changed as needs evolve,” said Tektronix, adding: “In many instruments, analogue and digital channels are sampled at different rates, triggered using separate hardware, and stored in different-sized records, making precise comparisons impossible.” 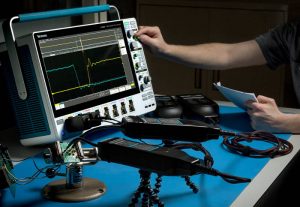 “Customers can configure according to their preference. Many customers prefer a simple, secure, dedicated scope without Windows. Others prefer running other applications on the scope, using extended monitors, for example,” said Tektronix, adding: The solid-state drive can be removed at any point in the future, extending the life of the scope as a dedicated instrument, if Windows goes out of support, for example.”

For analysing serial busses, decode and trigger are available for common serial standards, and decoded buses are time-aligned with other inputs. Decoded packet content can also be viewed in tabular form. Optional trigger and decode packages include: I2C, SPI, RS-232, CAN, LIN, FlexRay, USB, Ethernet10/100 and audio busses including I2S.

Also for bus use, there is automated jitter and eye analysis, including a jitter summery that creates: bathtub plot, TIE histogram, TIE spectrum or eye diagram

Amongst nice-to-have features, LEDs map the vertical scale and position knob to the selected waveform colour, and the same thing happens to match the trigger level knob to trigger source trace. There are also ‘non-collapsing front feet’ said the Tektronix, that don’t fold back with weight on them.

As well as the eight trace 2GHz version, there are also four and six channel versions, and lower bandwidth variants at 350MHz, 500MHz and 1GHz. 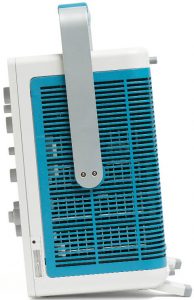 Features can be upgraded at any time after initial purchase, with bandwidth increases up to 1GHz in the field via a license. For upgrades to 2GHz, the scope needs to go to a Tektronix service centre.

Memory up to 125Msample/channel is also a field upgrades via license, as is solid-state drive with Windows license.