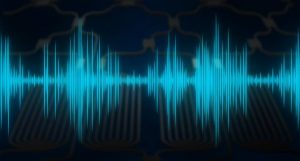 The scientists have proposed an approach that that could predict maximum data transfer rates in future optoelectronic microprocessors, or fundamental limits on nanophotonic interface bandwidth.

Surface plasmon polaritons, which can be created from a photon of energy, are collective electron oscillations on a metal surface coupled to an electromagnetic field.

“A surface plasmon could be viewed as a compressed quantum of light, and that explains why plasmonic devices are very promising – They are almost as compact as nanoelectronic components, but at the same time, they enable up to four orders of magnitude higher data transfer rates than electrical wires,” said the institute. “Replacing even some of the electrical interconnects on a chip with plasmonic components would give a boost to microprocessor performance.”

Due to high losses, surface plasmons can only propagate over distance in ‘active plasmonic waveguides’ which amplify the energy packets as they travel.

The scientists looked into one of the noise mechanisms – the spontaneous emission of photons which accompanies the stimulated photon emission used in amplification.

“We had to bridge the gap between three different areas in physics that rarely intersect: quantum optics, semiconductor physics, and optoelectronics,” said researcher Dmitry Fedyanin. “We have developed a theoretical framework that can be used to describe photonic noise in structures incorporating active media with a broad gain spectrum.”

Although this approach was initially conceived for plasmonic waveguides with gain, he added, it can be applied with no change to all optical amplifiers and similar systems.”

“If we know the noise power in a nanophotonic communication channel, as well as its spectral characteristics, it is possible to evaluate the maximum rate of data transfer along that channel,” said fellow researcher Andrey Vyshnevyy. “Furthermore, we can identify ways to reduce the amount of noise by choosing certain regimes of device operation and using optical and electrical filtering techniques.”

Using the theory, the researchers predict that 200 x 200nm plasmonic waveguide could transmit 10Gbit/s per spectral channel across 5mm – the width of a microprocessor.

“Not to mention that a single nanoscale waveguide can be simultaneously used by several dozen of these spectral channels,” said the Institute. “The maximum rate through copper interconnect of similar dimensions is only 20 Mbit/s.”

The work is published in Physical Review Applied.