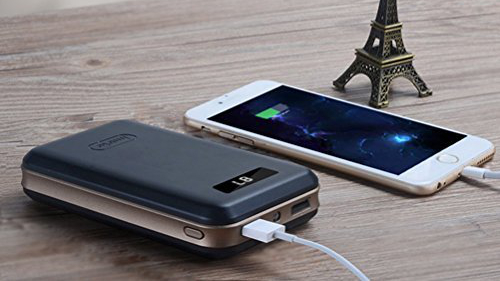 You’re using your fancy smartphone or tablet more than ever, and as such the power keeps draining. You’ve got to do something about it.

You know that a portable battery pack will do the trick, but – like us – you have no idea how much to spend or for what capacity.

The key features – beyond the high capacity, which could recharge a Samsung Galaxy S7 around five or six times before needing to be plugged in itself – are the LED display and the double USB output.

The former is great because you’ll not have to guess how much power is left based on randomly blinking LEDs, and the latter is excellent for charging as quickly as possible.

That’s because it features something that anyone in the market for a power bank should be looking out for: a 1A and 2.1A output.

That means you can charge your phone or tablet as quickly as it can manage – for instance, the iPhone or new flagship Android phones can handle the increased charge, and the iMuto power bank can intelligently work out how much charge can be thrust in.

There’s one feature missing that users of the Google Pixel, OnePlus 3T and other flagship phones would like: Qualcomm QuickCharge 3.0 support (which sees insanely rapid charging speeds).

However, a quick scan online shows that adding that feature in would hike up the price quite considerably – so if you’re not desperate to have the ‘day’s charge in half an hour’ feature in a portable battery, this is the deal for you.

Sadly, it’s only going to be around for today (although some have trickled on a little longer) so if you’re thinking about buying, best do it soon.