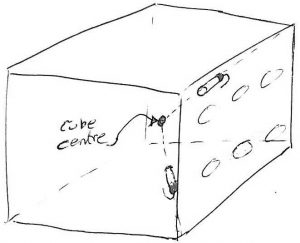 Tilting the tube lets the ball bearing roll down and short the contact to the tube wall.

Thinking of a dice, I think you only need two tilt switches wired in parallel to break contact when a six is thrown, if these are mounted on diagonals (see diagram).

If the two sensors are are on lines between the centre (show as a spot) and two vertices on opposite corners of the six face, oriented with the contact ends towards the vertices, then at least one of them will be shorted unless the six face is upper-most – assuming the dice has landed on a flat-ish surface.

Other sorts of tilt switch.

There is also a type of tilt switch with an insulating tube and four contacts in a square at the bottom, which one websites (not Amazon)  insists are all contacted at once by the ball in the ‘on’ orientation, but I can not help thinking that no ball can touch four things simultaneously unless there is some compliance somewhere, and that cross-wiring between the terminals might help to increase reliability.

And for detection of the direction of tilt, there are some multi-way tilt switches at the top of this page, and one here.

If you don’t mind lots of static power consumption, there are optical tilts switches, in which a moving thing interrupts light between an led and photo-transistor – or photo-transistors in the case of four-way tilt switches.