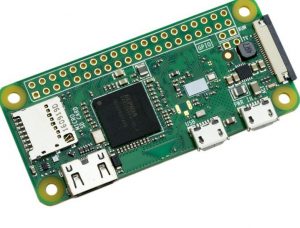 There’s also a camera interface, which has been added to the Zero since its original launch, and that will bring in a wide range of possible applications.

Having received feedback that users often ended up adding a USB hub to the Zero, for keyboards and network adapters, the Zero W was targeted to fix this problem by incorporating the same Cypress CYW43438 wireless chip as the Raspberry Pi 3 Model B, for the Bluetooth 4.0 and 802.11n wireless LAN comms.

In terms of hardware, the Raspberry Pi Zero W features:

There’s also an official injection-moulded case, following the same design as the official case for the Raspberry Pi 3, featuring three interchangeable lids (blank, an aperture to access GPIOs, an aperture and mounting point for a camera).

“We imagine you’ll find all sorts of uses for Zero W,” said Foundation co-founder Eben Upton. “It makes a better general-purpose computer because you’re less likely to need a hub: if you’re using Bluetooth peripherals you might well end up with nothing at all plugged into the USB port. And of course it’s a great platform for experimenting with IoT applications.”

The Zero was famously given away free back in 2015 with the organisation’s official The MagPi magazine – if you were lucky enough to find a copy left standing on the shelves – so there can be no complaints about cost.

You can read the full story on the Raspberry Pi website.

You can also see what our technology editor, Steve Bush, has written about the Pi Zero W – New Raspberry Pi – the Zero W – has Wi-Fi and Bluetooth