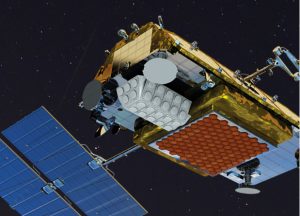 Each satellite has several space grade Virtex-5QV devices in the On Board Processor (OBP), delivered by SEAKR Engineering.

“The re-configurability of Xilinx’s Virtex-5QV enables Iridium NEXT to continue in-orbit integration of future advancements and innovations throughout its operational lifetime, providing scalability and flexibility for potential new applications not yet envisioned,” said Eric Anderson, president of SEAKR.

According to Xilinx, an OBP delivers ~1Tflop of reconfigurable fault-tolerant processing, and is the highest performance reconfigurable processor in space to-date.

Virtex-5QVs are built on the second-generation ASMBL column-based architecture of the Virtex-5 family with support in Xilinx’s ISE Design Suite.

Since its creation in 1982, Colorado-based SEAKR has delivered over 100 systems that have been launched. Products include IP routers, solid state recorders, re-programmable modems, payload processors, command systems and data handling systems.