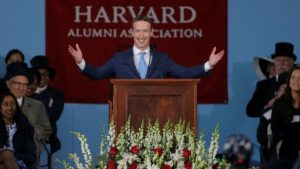 “Technology and automation are eliminating many jobs,” said Zuckerberg, “membership in communities is declining. Many people feel disconnected and depressed, and are trying to fill a void. We have a generational challenge — to not only create new jobs, but create a renewed sense of purpose.”

“I found that out the hard way,” said Zuckerberg, “you see, my hope was never to build a company, but to make an impact.” A a result of that aspiration he lost his entire initial management team at Facebook because they all wanted to sell out when offers for the company came in, but he didn’t.

Zuckerberg’s career advice to the students was that: “Ideas don’t come out fully formed. They only become clear as you work on them. You just have to get started. If I had to understand everything about connecting people before I began, I never would have started Facebook. The idea of a single eureka moment is a dangerous lie. It makes us feel inadequate since we haven’t had ours. It prevents people with seeds of good ideas from getting started.”

The generational goals for millennials should be, he said: “Stopping climate change before we destroy the planet and getting millions of people involved manufacturing and installing solar panels. Curing all diseases, modernising democracy so everyone can vote online, and personalising education so everyone can learn.”

“Today we have a level of wealth inequality that hurts everyone,” said the world’s fifth richest man, “when you don’t have the freedom to take your idea and turn it into a historic enterprise, we all lose. Right now our society is way over-indexed on rewarding success and we don’t do nearly enough to make it easy for everyone to take lots of shots. There is something wrong with our system when I can leave here and make billions of dollars in 10 years while millions of students can’t afford to pay off their loans, let alone start a business.”

“We live in an unstable time,” concluded Zuckerberg, “there are people left behind by globalisation across the world. This is the struggle of our time. The forces of freedom, openness and global community against the forces of authoritarianism, isolationism and nationalism. Forces for the flow of knowledge, trade and immigration against those who would slow them down.”